The federal government is grappling with the explosive question of whether to let anyone of any age buy the controversial morning-after pill Plan B directly off drugstore and supermarket shelves without a prescription. 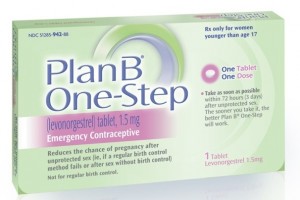 The Food and Drug Administration has until Wednesday to respond to a request from the drug’s manufacturer to make the pill as easy to get as toilet paper and toothpaste, a move pushed by some doctors, health advocates, family-planning activists, members of Congress and others to help women prevent unwanted pregnancies.

Opponents, however, say such a decision would expose girls and women to potential risks from taking high doses of a potent hormone, interfere with parents’ ability to monitor their children and make it easier for men to prey on vulnerable minors.

The request follows a series of steps in recent years that have gradually made Plan B easier to obtain. If it is approved, the pill would move out from behind pharmacists’ counters, eliminating the requirement that women produce a prescription or prove that they are at least 17 years old to get it without a doctor’s order. Instead, Plan B would be available on store shelves, along with condoms, contraceptive sponges and spermicides.

“Hopefully, it will be right on the shelves between the condoms and the pregnancy tests,” said Kirsten Moore of the Reproductive Health Technologies Project, a Washington-based advocacy group. “We think it’s good news for women’s health and long overdue.”

UPDATE: HHS’s Sebelius has overruled her experts and moved to block the sale of the drug off the shelf.

December 6, 2011 O, Tannen-bomb: the Christmas tree controversy in Rhode Island
Recent Comments
43 Comments | Leave a Comment
Browse Our Archives
get the latest from
Catholic
Sign up for our newsletter
POPULAR AT PATHEOS Catholic
1

Saints of the Americas
The Catholic Bard presents to you... SAINTS OF THE AMERICAS St. Louis...
view all Catholic blogs
What Are Your Thoughts?leave a comment