Some may recall the story of Fr. Michael Rodriguez, from the Diocese of El Paso, who was promptly reassigned last fall after making some strong public statements — and taking out newspaper ads — condemning homosexual activity.

In a rare move, Catholic Bishop Armando X. Ochoa and Monsignor Arturo Bañuelas on Wednesday sued a controversial priest and his brother, alleging they mishandled thousands of dollars in church money. 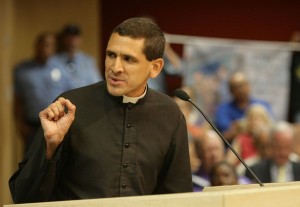 The suit, described as an extraordinary measure by the bishop, alleges that the Rev. Michael E. Rodriguez improperly accepted donations meant for San Juan Bautista parish and opened certificates of deposit in his name that were meant for church construction projects.

The Rev. Rodriguez, who was reassigned from San Juan Bautista Parish on Sept. 20, 2011, to Santa Teresa de Jesus Parish in Presidio, Texas, denied any wrongdoing in a statement released Thursday. The priest was reassigned for becoming politically involved in a recall effort against the mayor and two City Council representatives.

On Thursday, Ochoa said he could not comment on the lawsuit.

But according to the suit, Ochoa learned of the alleged mishandling on Sept. 7, 2011, when two former parishioners reported that the Rev. Rodriguez was soliciting money from them and others but asked that the checks be made payable to him instead of the church.

In a letter to parishioners on the El Paso Catholic diocese website, Ochoa said that Rodriguez failed to comply with diocesan policies relating to parish finances. He also stated that the priest has repeatedly refused to make a complete disclosure of how San Bautista church donations were used.

“I have had to resort to an extraordinary measure in order to protect the patrimony and restore the financial integrity of San Juan Bautista parish,” Ochoa stated in the letter.

The lawsuit gives a detailed account of how the Rev. Rodriguez allegedly inappropriately deposited donations in various accounts to keep them secret, solicited funds and completed building projects without the approval of the bishop and requested checks be made in his name.

Police said neither Ochoa nor Bañuelas has filed a criminal complaint.

“We don’t have a case at this time,” said El Paso police spokesman Darrel Petry.

Renee Railey, spokeswoman for the district attorney, said there currently is no investigation of the Rev. Rodriguez and his brother.

In a statement Thursday, the Rev. Rodriguez said Ochoa’s legal action is unjust and he is ready to defend himself.

“Over the course of 9 1/2 years as the parish priest of San Juan Bautista Catholic Church, I poured my heart and soul into caring for this parish, both in terms of temporal goods, and especially spiritual goods,” he said. “I’m confident that hundreds of my former parishioners will eagerly testify to this.”

Colleen Hammond has additional details. And the El Paso paper looks at the “politics” behind the moves.

And for the curious, you can see a video of Fr. Rodriguez in action here.

January 16, 2012
Slim Tim: Doctor reveals that heavyweight church leader is on a diet
Next Post

January 16, 2012 Martin Luther King Jr.: "Love your enemies...love has redemptive power"
Recent Comments
0 | Leave a Comment
"I think I would have been happier had the CDF handled the nuns the way ..."
Theodore Seeber Vatican challenges “interpretation” of cardinal’s remarks ..."
"Blaming "Islamics" for this is like blaming the Pope for the Holocaust Denial of Hutton ..."
Theodore Seeber One killed, 44 injured in Catholic ..."
"It smacks to me of hyper-sensitivity, a veiled spiritual and intellectual pride, with regards to ..."
J D Pope Francis: “A Christian who complains, ..."
"Oh, no, we never change our mind, and we always agree, even on points of ..."
Ron Chandonia Vatican challenges “interpretation” of cardinal’s remarks ..."
Browse Our Archives
Related posts from The Deacon's Bench