Slim Tim: Doctor reveals that heavyweight church leader is on a diet 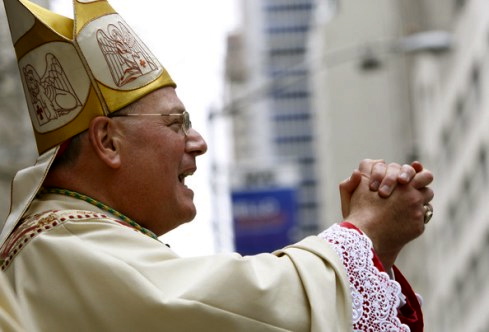 And he’s hoping the cardinal-designate will soon be a lesser man.  Details:

Weight-loss guru Dr. Howard Shapiro tells us that Dolan, 61, has dropped approximately 25 pounds since he became a patient at his upper East Side practice in February 2011, and, he adds, he’d like to see the holy man double that figure in the coming weeks.

The Vatican announced on Jan. 6 that Dolan, who has headed the the Archdiocese of New York since 2009, will be elevated to cardinal in Rome on Feb. 18.

“We’d love to see him lose eight to 10 pounds in the next four weeks” leading up to his big date in Rome “and then go from there,” says Shapiro, who, tongue-in-cheek, says he’s putting Dolan through “Red-Hat Boot Camp”— a reference to the red zucchetto, or skull cap, that cardinals wear.

In actuality, Shapiro says Dolan lost 25 pounds within the first two and half months of consulting his practice — and has pretty much kept the weight off — via a personalized program that’s geared to the archbishop’s busy social schedule.

“He’s a very “motivated and focused man,” says Shapiro, who won’t divulge his patient’s weight, but predicts Dolan will be Pope one day.

The medicine man is the best-selling author of the “Dr. Shapiro’s Picture Perfect Weight Loss” series of books, which use comparative photographs of food and their calorie counts as visual aids to help dieters shed pounds.

The earthy Dolan has joked about his love of food and his girth.

During an interview with “60 Minutes” in March, Dolan walked by the crypts beneath St. Patrick’s Cathedral, where all archbishops are eventually interred, and said that his predecessor, Cardinal Edward Egan , “teases me that he wonders if one is going to be enough.”

“I might have to rent — a space and a half,” Dolan cracked.

Shapiro also says that shortly after Dolan began dieting, “he called me to say, ‘I’m at a Steak ‘n’ Shake. What do I order?”

January 15, 2012
Did they sing this at your parish today?
Next Post

January 16, 2012 Jolt: Texas bishop sues outspoken priest
Recent Comments
0 | Leave a Comment
Browse Our Archives
get the latest from
Catholic
Sign up for our newsletter
POPULAR AT PATHEOS Catholic
1

Jeremiah 1:4-19 And Its Theological Implications
The book of Jeremiah is one that is both perplexing and enlightening. ...
view all Catholic blogs
What Are Your Thoughts?leave a comment