The announcement was made earlier this week:

Pensacola’s oldest Catholic church has been designated one of the nation’s 72 minor basilicas under an order by Pope Benedict XVI. 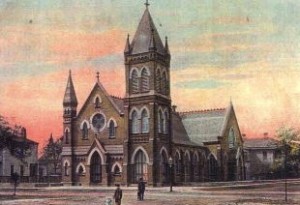 The parish of St. Michael the Archangel, which traces is roots to the 16th century exploration of Northwest Florida, was canonically established in 1781. The current church building, located at the southwest corner of Palafox and Chase streets, was constructed in 1886.

“It’s a very nice honor for the area and for the local church,” Monsignor Luke Hunt said.

The parish submitted the application to the Vatican for the basilica designation in 2003 with the hopes of receiving it in time for Pensacola’s 450th anniversary celebration in 2009.

“Unfortunately, it didn’t happen then,” Hunt said. “One of our priests in Rome asked about it, and it was immediately acted on.”

Basilica is an honor bestowed on a church deemed by the pope to have historical and spiritual importance. Churches are categorized as either major or minor.

The Catholic Church’s four major basilicas are located in Rome.

“It’s a very happy ending to a very long process,” said the Rev. Peter McLaughlin, pastor of the church. “It’s wonderful for the parish and great for the community.”

The Diocese of Pensacola-Tallahassee has more:

The Basilica of St. Michael the Archangel was designated in part due to its long history. Tracing its roots to the Spanish exploration of northwest Florida in the 16th century, the parish was canonically established in 1781 and is the oldest continuously operating parish in the state of Florida. The current church building was dedicated in 1886. 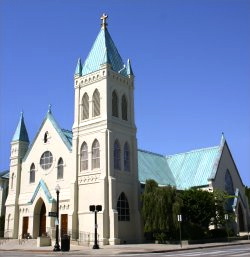 In his statement announcing the designation, Archbishop [Thomas] Wenski praised Bishop John H. Ricard, bishop emeritus of the diocese, for his perseverance in securing the title of basilica for St. Michael: “We thank Bishop John Ricard, our bishop emeritus, for having made this initial request and for his consistent and persistent work throughout the years. It is only fitting that the Vatican’s letter and decree announcing the designation of St. Michael the Archangel to Minor Basilica be in Bishop Ricard’s name. On behalf of the Catholics of Pensacola-Tallahassee I thank you, Bishop Ricard, for your vision of bringing this honor to St. Michael the Archangel and the diocese.

January 22, 2012 Why do Catholics have to get married in church?
Recent Comments
0 | Leave a Comment
"I think I would have been happier had the CDF handled the nuns the way ..."
Theodore Seeber Vatican challenges “interpretation” of cardinal’s remarks ..."
"Blaming "Islamics" for this is like blaming the Pope for the Holocaust Denial of Hutton ..."
Theodore Seeber One killed, 44 injured in Catholic ..."
"It smacks to me of hyper-sensitivity, a veiled spiritual and intellectual pride, with regards to ..."
J D Pope Francis: “A Christian who complains, ..."
"Oh, no, we never change our mind, and we always agree, even on points of ..."
Ron Chandonia Vatican challenges “interpretation” of cardinal’s remarks ..."
Browse Our Archives
get the latest from
Catholic
Sign up for our newsletter
POPULAR AT PATHEOS Catholic
1

Progressive Jesus Is Also Fake
Jesus was not a progressive. As my readers explored last week, U.S. Christians...
view all Catholic blogs
What Are Your Thoughts?leave a comment