Cardinal Egan takes back apology for abuse: “I don’t think we did anything wrong”

He made his remarks in an interview with a Connecticut magazine, and it’s set off a firestorm:

In 2002, at the height of the outcry over the sexual abuse of minors by Roman Catholic priests, the Archbishop of New York, Edward M. Egan, issued a letter to be read at Mass. In it, he offered an apology about the church’s handling of sex-abuse cases in New York and in Bridgeport, Conn., where he was previously posted. 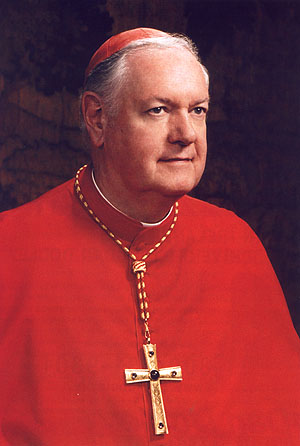 “It is clear that today we have a much better understanding of this problem,” he wrote. “If in hindsight we also discover that mistakes may have been made as regards prompt removal of priests and assistance to victims, I am deeply sorry.”

Now, 10 years later and in retirement, Cardinal Egan has taken back his apology.

In an interview in the February issue of Connecticut magazine, a surprisingly frank Cardinal Egan said of the apology, “I never should have said that,” and added, “I don’t think we did anything wrong.”

He said many more things in the interview, some of them seemingly at odds with the facts. He repeatedly denied that any sex abuse had occurred on his watch in Bridgeport. He said that even now, the church in Connecticut had no obligation to report sexual abuse accusations to the authorities. (A law on the books since the 1970s says otherwise.) And he described the Bridgeport diocese’s handling of sex-abuse cases as “incredibly good.”

All of which has Cardinal Egan, now 79 and living in Manhattan, drawing fire from advocates who say he has reopened old wounds.

“To many victims,” said Paul Mones, a lawyer who represented several victims of sexual abuse in New York, “an apology was critical to their being made whole, to feeling that, yes, the church knows that I was wronged and that this was a problem that was going on for decades. So if the statements are true, for him to come out and say he was wrong for the apology is more than tragic.”

February 8, 2012 Nevermore: did you know you can actually see the raven that inspired Poe?
Recent Comments
0 | Leave a Comment
"I think I would have been happier had the CDF handled the nuns the way ..."
Theodore Seeber Vatican challenges “interpretation” of cardinal’s remarks ..."
"Blaming "Islamics" for this is like blaming the Pope for the Holocaust Denial of Hutton ..."
Theodore Seeber One killed, 44 injured in Catholic ..."
"It smacks to me of hyper-sensitivity, a veiled spiritual and intellectual pride, with regards to ..."
J D Pope Francis: “A Christian who complains, ..."
"Oh, no, we never change our mind, and we always agree, even on points of ..."
Ron Chandonia Vatican challenges “interpretation” of cardinal’s remarks ..."
Browse Our Archives
Related posts from The Deacon's Bench

Contraband Lipstick: Short movie reviews
In the order in which I saw them. The Rider Named Death:...
view all Catholic blogs
What Are Your Thoughts?leave a comment