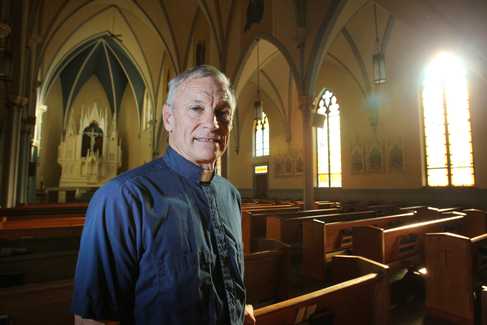 After 47 years as a priest, and at least two decades of straying from the Roman Catholic Missal by ad libbing parts of the Mass, the Rev. Bill Rowe of St. Mary Church has resigned under pressure from the bishop.

Why? Because he doesn’t agree that a priest should be restricted to the exact words of the Missal, including new changes in the Mass that were intended to more closely interpret earlier Latin versions.

The changes were ordered by the Vatican and took effect in late November.

Rowe, 72, said he was called to a meeting in October at the Belleville home of Bishop Edward Braxton. Rowe said that Braxton told him he could not change even small parts of what a Catholic priest is supposed to say during the portions of the Mass that are controlled by the Missal.

Rowe said Braxton told him to “think about it” for three days and then write him a letter. Rowe said he sent the letter on Oct. 12 stating he could not accept what Braxton wanted but did not want to resign or retire. He said he did not receive a response from Braxton until a few days ago, accepting his resignation.

Rowe will leave his parish in June after a successor is installed.

The Rev. John Myler, diocese spokesman, said: “I have no comment at this time. If that changes, I will contact you.”

Frank Flinn, an adjunct professor of religious studies at Washington University in St. Louis, said it is the first removal of a priest that he knows about in connection with a failure to follow the new version of the Roman Missal.

“I predicted that it would drive priests out and I was laughed at, at the time,” Flinn said, “but here it is, the truth.”

The St. Louis Post-Dispatch has more:

Last Sunday, instead of saying “Lord our God that we may honor you with all our mind and love everyone in truth of heart,” during the opening prayer, he altered the phrasing to better reflect the day’s Gospel message, in which Jesus heals a man with a troubled spirit.

“We thank you, God, for giving us Jesus who helped us to be healed in mind and heart and proclaim his love to others,” the 72-year-old priest prayed instead.

“The problem is that when I pray at Mass, I tend to change the words that are written in the book to match what I was talking about, or what a song is about,” Rowe said in an interview.

The book in question is the Roman Missal, a book of prayers, chants and responses used during the Mass. Rowe has been saying some of those prayers in his own words for years.

But in December the Vatican-mandated adoption of a new English-language translation of the Missal may have given bishops an opportunity to rein in freewheeling priests who have been praying in their own words for decades.

“Since December when the new translation came out, no one has said what would happen to you if you changed stuff,” said the Rev. John Foley, director of the Center for Liturgy at St. Louis University. “But I find it hard to believe a priest in Illinois would be forced to resign because he wasn’t using the exact words from the translation. It’s not a strong-enough offense for that.”

Read more.
And you can watch a short interview with him on the subject right here.