That would be Eve Tushnet, who has just arrived at Patheos with her self-titled blog. 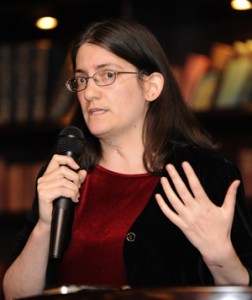 I think Eve Tushnet’s name became much more widely known in 2010, when the New York Times profiled her, identifying her in the opening graph as that (to them) most exotic of all creatures, a “the celibate, gay, conservative, Catholic writer”.

My goodness, these labels, categories and pigeonholes — our increasingly polarized world loves them, because they tell us who we should read or not read, hate or not hate in the blink of an eye — but that just makes them all the more abhorrent, doesn’t it? Most of us are a great deal more than what is made obvious within our “categories.” Eve, for example is — like Leah Libresco at Unequally Yoked – a most interesting Yalie.

She studied philosophy at Yale University, where she was received into the Catholic Church. She is a freelance writer in DC, and has been published in (among others) Commonweal, The National Catholic Register, National Review, and The Washington Blade. Eve blogs at EveTushnet.com. Her hobbies include sin, confession, and ecstasy.

That would be the mystical sort, not the drug. And as of today, she blogs here at Patheos,

Stop by her blog and say hello!

May 24, 2012
Embracing poverty: life at the Catholic Worker
Next Post

May 24, 2012 Answering the call -- at a baseball game
Recent Comments
0 | Leave a Comment
Browse Our Archives
Follow Us!