Australian priest admits being secretly married for a year

A Catholic priest in Australia has publicly admitted that he has been married for a year and claimed “there are more like me.” 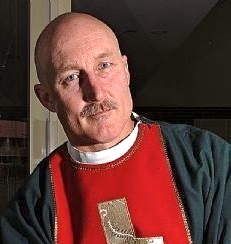 “So I’ve fallen in love and I’ve got married and it’s outside of most people’s awareness, but I’m sure people within the church could have had a suspicion,” Father Kevin Lee told Australia’s 7News, a partner of NBC News.

Lee, a priest for 20 years, told his congregation that he had been living a secret double life with his wife Josephina, breaking the Church’s rule that priests should remain celibate.

He said there were others like him around the world.

“That’s one of the reasons that’s motivated me to make public my admission that I’m one of those people who’s been a pretender: To draw to the attention of the public that there are more like me, in fact most of them,” he said.

Lee said he had made little effort to hide his relationship and suspected people within the church hierarchy knew about his marriage.

He and Josephina met in the Philippines and married in secret.

As recently as this week, some of his parishioners in Glenmore Park, Sydney, said they knew nothing about his relationship, Lee said.

He said he pitied what he called “sacrificing” priests around the world who were denying themselves a relationship.

“I feel sorry for them, I really do, but I think they need to admit they are not being led properly,” he told the television news program.

“I think celibacy has to go as a prerequisite for being a minister in the Catholic religion,” he added.

In an update to its original report, 7News reported that Lee had been removed from his position as parish priest and then excommunicated by the church.

There’s more at this link, along with video.

May 3, 2012 Will Catholics decide this year's election?
Recent Comments
0 | Leave a Comment
"I think I would have been happier had the CDF handled the nuns the way ..."
Theodore Seeber Vatican challenges “interpretation” of cardinal’s remarks ..."
"Blaming "Islamics" for this is like blaming the Pope for the Holocaust Denial of Hutton ..."
Theodore Seeber One killed, 44 injured in Catholic ..."
"It smacks to me of hyper-sensitivity, a veiled spiritual and intellectual pride, with regards to ..."
J D Pope Francis: “A Christian who complains, ..."
"Oh, no, we never change our mind, and we always agree, even on points of ..."
Ron Chandonia Vatican challenges “interpretation” of cardinal’s remarks ..."
Browse Our Archives
Related posts from The Deacon's Bench

Do Not Scorn
Charity, love, is at the heart of authentic Christian morality. What we...
view all Catholic blogs
What Are Your Thoughts?leave a comment