Cardinal Dolan on “The Law of the Gift” 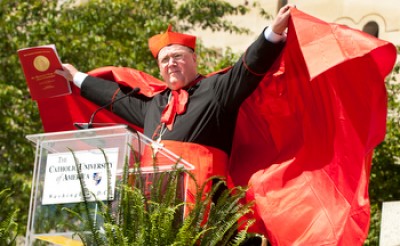 The Catholic University alumnus spoke to its graduating class this weekend:

Just six days ago, Pope Benedict XVI, in addressing bishops from Arizona, Colorado, New Mexico, and Wyoming, spoke warmly of Catholic education here in the United States, and of the need of our Catholic colleges and universities “ . . . to reaffirm their distinctive identity in fidelity to their founding ideals and the Church’s mission in service to the Gospel.”

The Holy Father showed a somber realism, though, when he expanded that need to include “ . . . ecclesial communion and solidarity in the Church’s educational apostolate, becoming all the more evident when we consider the confusion created by instances of apparent dissidence between some representatives of Catholic institutions and the Church’s pastoral leadership . . .”

Is not a big part of our gladness and pride this happy morning of graduation a grateful recognition that this university does indeed exude such “ecclesial communion and solidarity?” That this university is both Catholic and American, flowing from the most noble ideals of truth and respect for human dignity that are at the heart of our Church and our country? That a university’s genuine greatness comes not from pursuing what is most chic, recent, or faddish, but what is most timeless, true, good, and beautiful in creation and creatures? That the true goal of a university is to prepare a student not only for a career but for fullness of life here and in eternity?

Some might wonder if Pope Benedict’s description of a university is way too impractical; if a university can be really Catholic and American; if the genuine freedom a university demands can flourish on a campus whose very definition includes a loyalty to Holy Mother Church . . . well, to them I say, as you and I did, “Let them come to Brookland!” This university you can now, with me, call alma mater, at the heart of our nation, is also ex corde ecclesiae, at the heart of the Church. For that I am most proud.

The Holy Father mentions not only truth as being at the core of the mission of a Catholic university, but also love. And so I want to tell you about a wonderful woman named Clara Almazo. Just a little over a month ago, Clara and her little eight year old grandson, Michael, were walking home from Holy Thursday Mass at Our Lady of Mount Carmel Parish on Staten Island. As they crossed the street, a car barreled toward them, with little Michael in the crosshairs. His abuela, Grandma Clara, pushed her grandson away to safety, taking herself the whole force of the car, and was instantly killed.

Clara’s selfless act of heroic love was, as you might imagine, the tearful talk of New York over the Easter weekend. No one failed to note that her life-giving act was made the more poignant as it came on the night before Jesus died, returning from the Mass of the Lord’s Last Supper, when He predicted His own sacrificial death, and where he gave the touching example of selfless service in washing the feet of His apostles.

When I celebrated her funeral on Easter Tuesday, every one of her 13 children and 23 grandchildren were profoundly sad; but not one of them was surprised, for through their sobs, they told me she was a woman of constant, heroic, selfless giving.

Let me try to bring all of these together with the coherence I learned at this University.

Might I suggest these all coalesce in what we call the Law of the Gift.

“Greater love than this no one has, than to give one’s life for one’s friends.” There’s the Law of the Gift as defined by the Son of God Himself.

“I know Jesus Christ, who sacrificed His life for others. I understand well the meaning of the cross. I am ready to give up my life for my people.” There’s the Law of the Gift as stated by Shabaz Bhatti, a Catholic who served as federal minister for religious minorities in Pakistan.

“For we are at our best, we are most fully alive and human, when we give away freely and sacrificially our very selves in love for another.” There’s the Law of the Gift as described by Blessed John Paul II.

Not long ago at a dinner I sat next to Admiral Mike Mullen, a Marine, the chairman of the Joint Chiefs of Staff, himself a Catholic, who asked me, “What percent of the American population is Catholic?”

“But do you realize,” he went on, “that 40% of the Marine Corps identify themselves as Catholic?”

I did not realize that, but I was not surprised, nor was Admiral Mullen, for at the heart of the Church’s ethos is the Law of the Gift, and it would be tough to be a Marine — or to be an abuela like Clara Almazo — if you didn’t believe in that.

Or, as the head of the department of pediatric oncology at a leading hospital recently told me, “Cardinal Dolan I’m not even a religious believer, but, when I hire doctors, nurses, attendants, or staff for this grueling work of trying to heal kids with cancer, the applicants who are alumni of Catholic school have a leg up.”

I didn’t know that either, but, I’m hardly surprised, for, while it’s sure not listed in any catalogue, the course on the Law of the Gift is part of the DNA of any Catholic school, this sterling one included.

So, I conclude that all of you, at this university where every classroom features the most effective audio-visual aid of them all, the crucifix; and where the entire campus is overshadowed by the dome of the shrine devoted to the Jewish woman who whispered, “Be it done unto me according to your will, not mine,” that I’m looking out at graduates who have majored in this Law of the Gift.

May 14, 2012 "With each 'The Blood of Christ' I spoke, my heart grew more glad..."
Recent Comments
0 | Leave a Comment
"I think I would have been happier had the CDF handled the nuns the way ..."
Theodore Seeber Vatican challenges “interpretation” of cardinal’s remarks ..."
"Blaming "Islamics" for this is like blaming the Pope for the Holocaust Denial of Hutton ..."
Theodore Seeber One killed, 44 injured in Catholic ..."
"It smacks to me of hyper-sensitivity, a veiled spiritual and intellectual pride, with regards to ..."
J D Pope Francis: “A Christian who complains, ..."
"Oh, no, we never change our mind, and we always agree, even on points of ..."
Ron Chandonia Vatican challenges “interpretation” of cardinal’s remarks ..."
Browse Our Archives
get the latest from
Catholic
Sign up for our newsletter
POPULAR AT PATHEOS Catholic
1

Why I won't recommend Jordan Peterson to my...
As a teacher at (what used to be) an all boys Benedictine...
view all Catholic blogs
What Are Your Thoughts?leave a comment