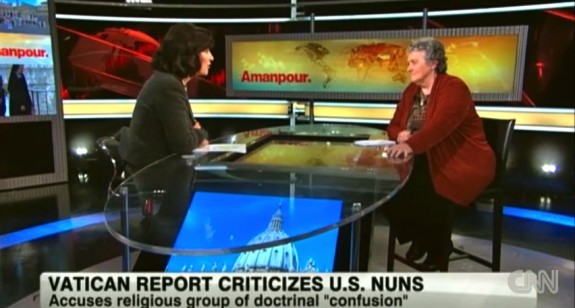 My blog neighbor and editor Elizabeth has a kick-ass takedown of Christiane Amanpour’s pitiful interview with Sr. Joan Chittister.   You can see the conversation for yourself — best viewed through the fingers over your eyes, when they aren’t in your ears — over at the Te Deum blog.

Chittister also allows Amanpour to get away with the easiest and laziest of arguments: these men didn’t handle the sex abuse scandals well, so they have no credibility, anyway; “it hasn’t been nuns that have been responsible,” Amanpour blubbers. It’s a subject completely irrelevant to this issue, but since Chittister allowed it — and nods in agreement — I have to call her on it; she knows perfectly well that religious orders of sisters have made huge payouts after accusations of abuse and have not always been quick to co-operate with investigations, which is a story the American press hasn’t liked to cover. The subject didn’t even belong in the interview, but once it’s broached, it’s a pretty bad moment, all around, for Amanpour who took the cheap route, for Sister Joan, who lether, and of course, the church, who may do penance for it all throughout all our lifetimes.

Amanpour then gets into the “life issues” and Sister Joan, bristles with offense and says she wants to laugh in irony, or something. She starts off fairly well, but I think she’s a bit disingenuous to say that the reason abortion is not specifically addressed by so many of the LCWR leadership is because they want to treat “everything” as a life issue, and that she doesn’t want to call social justice “social justice” because everything is a life issue.

Okay. Fair enough. But neither woman addresses what has upset Rome, which are instances — admittedly not widespread — where sisters have acted as escorts to abortion centers or suggested that abortion cannot be defined as really evil, because you know…everything is relative; marriage cannot be defined as being solely between a man and a woman because, you know…everything is relative.

You’ll have to read the rest.

But for my money, the most egregious twaddle (sorry, Joanne) isn’t the good sister’s “Orwellian doublespeak,” but Amanpour’s pitiful questioning.  Besides the cringe-inducing intro  — “practicing nun”?  Really? —  and the sweeping mis-characterizations, i.e., “no more Vatican II! ” and “straying from the Vatican party line,” the whole thing is lazy and, frankly, a journalistic embarrassment.  It isn’t an interview; it’s a platform.  At no point does Amanpour, you know, challenge Sr. Joan; at no point does she suggest that maybe, just maybe, Rome’s concerns might have some validity;  no where does she raise the very specific “causes for concern” that the Vatican has every right to raise.   Instead, she drags out predictable old tropes about sexual abuse (which, here, is irrelevant) and sexism (ditto).

The entire 11-minute exercise is blissfully free of facts (aside from some stats on declining vocations — the point of which seems unclear to me, and disregards completely those pockets of religious life where vocations are, in fact, climbing.)  In sum, the interview was unbalanced, badly researched, sloppily written and woefully incomplete.  (Not only that: 11 minutes is an eternity in television time.  There was an opportunity here for something of substance. It was an opportunity missed. Amanpour should know better.)

To paraphrase an old Seinfeld episode: did this offend me as a Catholic?  No.  It offended me as a journalist.