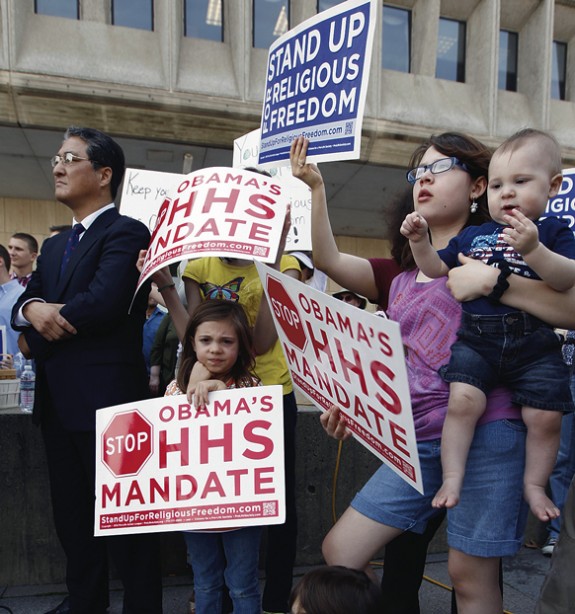 One observer thinks so:

The Catholic Church practically invented politics, so it may be asking too much to expect American bishops to steer completely clear of affairs of state. There are times when they couldn’t if they wanted to and they feel this is one of those times.

The upcoming “Fortnight for Freedom” campaign to push back against this administration’s contraceptive health care mandate, however, sounds so much like a “Fortnight to Defeat Barack Obama” that I’ve gotten to wondering what our prelates would have to do to cost the church its tax-exempt status. (IRS rules are pretty clear that churches have to give up their exemption if they campaign for or against a political candidate.)

That is not going to happen, and I’m not suggesting it should. But as a thought exercise, what would it take to provoke such a thing?

If a bishop compared Obama to, I don’t know, Hitler and Stalin, would that be campaigning against him?

Oh, but wait, Bishop Daniel Jenky of Peoria tried that already. Jenky wasn’t exactly a household name before that tirade.

What if, however, the best-known bishop in the country – and among the most flat-out likeable – said “the White House is strangling the Catholic Church?”

No again; Cardinal Tim Dolan, of New York, did that, too. And Bishop Salvatore Cordileone of Oakland said we have reason to fear “despotism” under Obama.

(Even Pope Benedict XVI has joined the fray – though the former Joseph Ratzinger is really not much of a fray-joiner. “Many of you, he told American bishops, “have pointed out that concerted efforts have been made to deny the right of conscientious objection…with regard to cooperation in instrinsically evil practices.’’ Abortion, he means. Birth control, which is barred under church teaching, must be provided free to employees of Catholic institutions as part of their health care plans under the Affordable Care Act. Where does abortion come in? Some opponents argue that the Part B ‘morning-after pill,’ which is also provided as part of the bill, is an abortifacient, though science doesn’t support that claim.)

Surely if the church ran a massive PR campaign just ahead of a national election, calling for widespread civil disobedience and reading letters about it from pulpits across the nation, that would cross the line into campaigning?

Ixnay on that, too, because the “Fortnight for Freedom” set to run from June 21-July 4th, is just such an effort.

June 8, 2012 Just in time to celebrate St. Ephrem the deacon...
Browse Our Archives
Related posts from The Deacon's Bench