Vatican’s social media head: “We need to cultivate our ability to listen to others…” 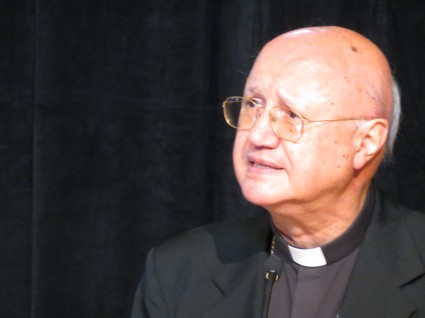 A highlight of the Catholic Media Conference this week was an address Friday by Archbishop Claudio Maria Celli, President of the Pontifical Council for Social Communications.  Archbishop Celli is endearing, brilliant and utterly disarming.  (At the Sign of Peace during Mass, he clasped both my hands and whispered with a smile, “Peace to you and ALL deacons!”).  His address to the conference was inspiring — and, in some ways, challenging.

I would also like to consider what this means when we speak of the Catholic press in general and the challenges facing us. I would like to highlight very briefly a few areas touching on our outreach both inside and outside the Church, including:

First, the Catholic press has to live up to the same professional and ethical standards as the press in general, the search for truth, fairness in reporting, respect for human dignity, and so forth, as I’ve mentioned before. It also has to face the same challenges as the secular media in producing content which attracts, interests, informs and inspires people.  The Pastoral Instruction Communio et Progressio notes: “That part of the Catholic press which is of general interest publishes news and opinions and background articles about all the facets and problems and worries of modern life. This it does in the light of Christian principles. It is the task of the Catholic press to balance, to complete and, if necessary, to correct the news and comments about religion and the Christian life. At one and the same time it will be a glass that reflects the world and a light to show it the way. It will be a forum, a meeting place for the exchange of views.”

Second, the Catholic press also has a vocation to build up communion, both internally within the Church, and externally with the wider world. The theme of our meeting is a reminder of who we are as Church, “We, though many, are one body”. And being true to the Catholic faith handed down to us from the Apostles, the Catholic Press must be at the same time catholic (with a small ‘c’), that is, universal in being open to dialogue with the rest of the world in our desire to share the Gospel. We need to cultivate our ability to listen to others, to better understand their experience, and to see how we can also learn from them and be enriched. Speaking to representatives of the world of culture in Lisbon, Portugal, in 2010, the Holy Father said:

“The Church, in her adherence to the eternal character of truth, is in the process of learning how to live with respect for other “truths” and for the truth of others. Through this respect, open to dialogue, new doors can be opened to the transmission of truth. The Church – wrote Pope Paul VI – must enter into dialogue with the world in which she lives. The Church becomes word, she becomes message, she becomes dialogue” (Ecclesiam Suam, 67). Dialogue, without ambiguity and marked by respect for those taking part, is a priority in today’s world, and the Church does not intend to withdraw from it. … Building a global citizenship based on human rights and civic responsibility, independent of ethnic origin or political allegiance, and respectful of religious beliefs. Given the reality of cultural diversity, people need not only to accept the existence of the culture of others, but also to aspire to be enriched by it and to offer to it whatever they possess that is good, true and beautiful.”

Third, the vocation of the Catholic press is to be missionary, also in the literal sense of the word. It aims to spread the good news of the Gospel to the ends of the earth. The methods, media and strategies employed vary greatly and depend on the local culture, the audience being reached and their disposition.  This outreach of evangelization concerns both Church members and non-members. We need to reach out to all people, wherever they are in their journey, by supporting, educating and inspiring them through who we are and what we produce. The pastoral instruction “Communio et Progressio” notes: “The modern media offer new ways of confronting people with the message of the Gospel, of allowing Christians even when they are far away to share in sacred rites, worship and ecclesiastical functions. In this way they can bind the Christian community closer together and invite everyone to participate in the intimate life of the Church.”

Fourth and finally, it is increasingly important for the Catholic press to work for greater harmony, unity and communion within the Church. The problems of division, polarization and lack of charity, have a negative effect on the Church’s internal life. These problems are not unique to the Church, and reflect a phenomenon increasingly common across society today. Part of the reason for this state of affairs is that new technologies and the culture of communication arising from them make it easier to isolate oneself and to congregate only with people who “think like I do”.  Communio et Progressio says:  “The Church looks for ways of multiplying and strengthening the bonds of union between her members. For this reason, communication and dialogue among Catholics are indispensable.”

In conclusion, I offer these words of Pope Benedict in his message this year for World Communications Day:  “Word and silence: learning to communicate is learning to listen and contemplate as well as speak. This is especially important for those engaged in the task of evangelization: both silence and word are essential elements, integral to the Church’s work of communication for the sake of a renewed proclamation of Christ in today’s world. To Mary, whose silence ‘listens to the Word and causes it to blossom’, I entrust all the work of evangelization which the Church undertakes through the means of social communication.” (2012 World Communications Day Message, “Silence and Word: Path of Evangelization”) 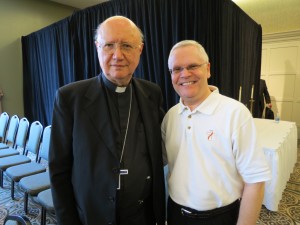 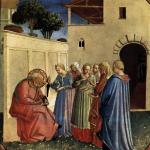