33 years later, man receives forgiveness for shooting police officer and is received into the Catholic Church 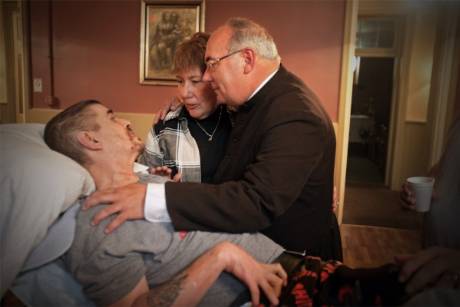 A stunning story of forgiveness in Ohio.  (H/T New Advent.):

Ron McClary, debilitated by multiple sclerosis, lay on a stretcher yesterday at Holy Family church and tried to speak as the widow of the Columbus police officer he shot in 1979 placed her hand on his arm.

As he struggled, she stopped him. “I forgive you,” Mary Hayes said, almost inaudibly.

For the Rev. Kevin Lutz, the pastor of the Franklinton church, it was a moment 33 years in the making.

It started in December 1979 when he walked into a room at Riverside Methodist Hospital the morning after Officer Thomas Hayes had been shot in the back and was paralyzed from the waist down. Lutz asked the officer if he’d forgiven the person who shot him.

Lutz tears up when he recalls Hayes’ reply: “‘I thought I was dying, and I didn’t want to go before Almighty God with hatred in my heart. I prayed I would go to heaven and that he would, too.’  ”

Mary Hayes waited in the church yesterday before McClary arrived for a Mass at which he’d receive his First Communion. She was conflicted, her stomach in knots, and not sure she wanted to be there.

“Father Lutz called me last night and … I asked him if this was my test as a Christian, because I wasn’t sure I was gonna make it,” she said, wearing a charm of a her late husband’s police badge on a chain around her neck. “Tom was a bigger person than I am.”

Ron McClary was 16 when he shot Tom Hayes as the officer tried to arrest him on a curfew violation at a convenience store. He was tried as an adult, convicted of felonious assault and served nearly 24 years in prison. As Hayes endured bed sores, catheters, infections, emergency-room visits and a leg amputation, he kept on praying for McClary and always hoped he’d convert to Catholicism, Lutz said. The two never met, and Hayes died in January 2011 at age 61.

Yesterday, McClary’s stretcher was placed in the aisle where Tom Hayes’ casket had sat the day of his funeral. Lutz leaned over McClary and showed him a drawing of Hayes that was near the altar along with the shoes the officer wore the night he was shot.

“In heaven, we will all be perfect friends, and on Earth, Jesus asks us to get ready for that now,” Lutz said during his homily, shortly before he gave McClary a Communion host dipped in wine. “That’s why Jesus tells us things like forgive, love your enemies, bless them and all kinds of things.

“Jesus asks us to carry our cross. He asks us to forgive, and we also have to be sorry for our own sins.”

"But Where Is the Lamb?": Several Millennia of...
When my nephew was bar mitzvah, he chose (!) as his Torah...
view all Catholic blogs
Copyright 2008-2020, Patheos. All rights reserved.