Bible belonging to Elvis goes on the auction block 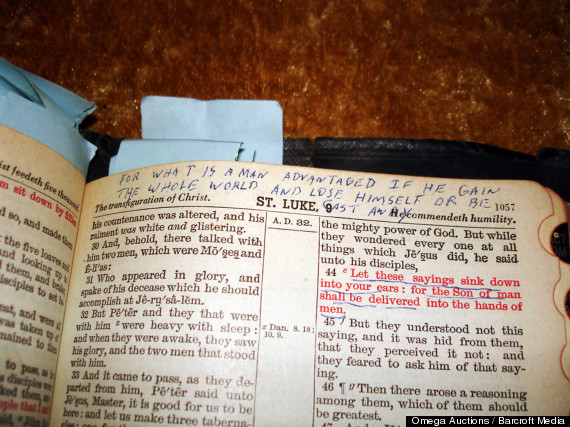 I suspect it’s The King’s King James version, don’t you?

Details from the BBC:

A bible which once belonged to Elvis Presley is expected to fetch more than £20,000 when it is auctioned in Greater Manchester next month.

The book was given to the legendary singer by his Uncle Vester and Aunt Clettes for his first Christmas at his Graceland home in 1957.

One note reads: “To judge a man by his weakest link or deed is like judging the power of the ocean by one wave.”

The bible, embossed in gold on a leather cover, is among more than 100 lots of Elvis memorabilia to go on sale at Omega Auctions in Stockport on 8 September.

The collection is being sold on behalf of a British Elvis collector and marks the 35th anniversary of “The King’s” death.

Auctioneer Paul Fairweather said: “With much of the memorabilia in the collection having never previously been seen in the market, we are expecting significant interest from Elvis fans and collectors worldwide.”

August 16, 2012 Santorum: government is forcing Catholics to sin
Browse Our Archives
Follow Us!

"The Democratic Platform Says We Don't Belong" says...
Kristen Day holds one of the most thankless positions around. She’s...
view all Catholic blogs
Copyright 2008-2017, Patheos. All rights reserved.