Ryan and Biden: a tale of two Catholics 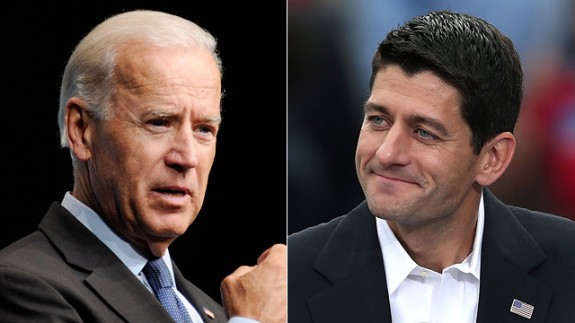 Ryan, 42, still belongs to the Catholic parish, St. John Vianney in Janesville, Wis., where he was an altar boy. Biden, 69, the first Catholic vice president in U.S. history, attends Mass at St. Patrick’s Parish and St. Joseph on the Brandywine Church, both in Wilmington, De.

Biden and Ryan both cite their faith as a formative influence, but neither is known as a standard-bearer for the Catholic hierarchy’s chief political causes: abortion and gay marriage. In fact, the two candidates are — politically at least — nearly polar opposites.

With Catholics comprising nearly a quarter of the U.S. electorate — and nearly a third in Midwestern swing states — the “Who’s the Better Catholic?” debate may become far more than an intrachurch squabble.

“It really has the potential to have a huge impact on this election,” said Maria Mazzenga, a historian at Catholic University in Washington.

Neither the Democratic nor Republican party platforms perfectly align with the wide body of Catholic social doctrine, which encompasses views on everything from war to economics to the unborn.

“The official teachings of the church can’t really be put into one camp or the other,” said Mazzenga.

So Catholic politicians must often choose between church and party orthodoxy, said R. Scott Appleby, a professor of history at the University of Notre Dame.

“In our current system, is it possible to have a politician who, along with papal teaching, says no to abortion, no to nuclear proliferation, no to poverty? The answer is no,” Appleby said.

Biden has said that “as a Roman Catholic, I am willing to accept the teachings of my church” on abortion. But, he continued in a 2008 “Meet the Press” interview, “for me to impose that judgment on everyone else who is equally and maybe even more devout than I am seems to me is inappropriate in a pluralistic society.”

Biden, who had already been barred from speaking at Catholic schools in Wilmington because of his stance on abortion, was blasted by bishops.

“It’s certainly true that we need to acknowledge the views of other people and compromise whenever possible,” Chaput said at the time, “but not at the expense of a developing child’s right to life.”

Bill Donohue, president of the conservative Catholic League, said the hierarchy has made it clear that outlawing abortion and defending traditional marriage are the church’s top political priorities.

“This puts Biden at a decisive disadvantage in making the case that he better represents Catholic teachings,” Donohue said.

But conservative Catholic activist Deal Hudson argues that Ryan, too, has a “Catholic problem.”

The Wisconsin congressman chairs the House Budget Committee and is credited with writing the 2012 and 2013 House Republican budget plans, which call for steep cuts to programs that care for the poor, such as food stamps and Medicaid, while giving tax breaks to the wealthy.

For the last two years, the U.S. Conference of Catholic Bishops has written a series of letters to House lawmakers, including Ryan, arguing that the “central moral measure” of any budget is how it affects “poor and vulnerable people.”

Ryan’s 2013 budget plan, which passed in the House, but has died in the Senate, “fails to meet these moral criteria,” wrote Bishop Stephen Blaire of Stockton, Calif., chairman of the bishops’ Committee on Domestic Justice and Human Development.

August 15, 2012
When Timothy Dolan danced with the Cosmo queen
Next Post

August 15, 2012 Bible belonging to Elvis goes on the auction block
Browse Our Archives
get the latest from
Catholic
Sign up for our newsletter
POPULAR AT PATHEOS Catholic
1