When Timothy Dolan danced with the Cosmo queen 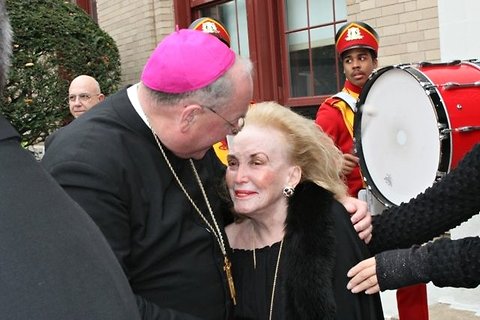 How’s this for a picture worth a thousand words?

The story behind it:

It was Oct. 20, 2010, about eight months after Ms. Brown’s husband of 51 years, David Brown, had died. Ms. Brown, who died on Monday at age 90, had donated $1 million to the Cardinal Hayes foundation, endowing a slew of student scholarships and establishing a permanent fund for the school’s annual play in honor of her husband, a longtime producer for Hollywood and Broadway. Ms. Brown, Archbishop Dolan, who was elevated to cardinal in February, and Regis Philbin, one of Cardinal Hayes’ best-known alumni, had converged on the high school for a special Mass and ceremony celebrating Mr. Philbin, a frequent donor.

Mr. Philbin, his wife, Joy, and Ms. Brown were waiting on the school steps, Ms. Brown was leaning on a cane and being supported by an aide when Archbishop Dolan pulled up in his car. As Kevin Meenan, the school’s fund-raising director, recalled on Tuesday, Archbishop Dolan had never been to the school, and he walked slowly toward the building to take in its elegant brick-and-stone facade.

Ms. Brown tried to walk forward to greet him, but she started tottering. Archbishop Dolan spotted her and jogged up the steps to help. Meanwhile, the school’s marching band burst into the Cardinal Hayes marching song, inspiring the archbishop to take Ms. Brown in his arms and twirl her around.

The dancing lasted only for a minute or so, Mr. Meenan said, but he will not soon forget the image of the bearlike archbishop squiring Ms. Brown. He wore his black bishop’s garment and a pink cap; she wore a drop-waist dress, black fur and lace-topped stockings.

Ms. Brown, Cosmopolitan’s editor from 1965 until 1997, decided to donate to Cardinal Hayes after a senior attorney at the Hearst Corporation, which owns Cosmopolitan, told Ms. Brown about the school. Ms. Brown had a history of donating to educational and other causes, and her husband’s death may have made her even more eager to donate to the arts, said her biographer, Jennifer Scanlon.

But in other respects, Cardinal Hayes was an odd choice for the woman who spent years teaching women to enjoy sex — premarital, marital and extramarital — and embrace Catholic taboos like birth control. Though her family was Protestant, she was not religious as an adult, Ms. Scanlon said.

“She didn’t have much use, actually, for organized religion,” Ms. Scanlon said. In fact, when Ms. Brown was marketing “Sex and the Single Girl,” her best-selling 1962 book, she tried to bring it to the Catholic Church’s attention in the hopes that church leaders would decide to censor it. (She thought it would be good for sales; they ignored her attempt.)

Almost a half-century later, however, she was pledging $1 million to a bastion of Catholic education — and dancing in the archbishop’s arms.

August 15, 2012 Ryan and Biden: a tale of two Catholics
Browse Our Archives
get the latest from
Catholic
Sign up for our newsletter
POPULAR AT PATHEOS Catholic
1