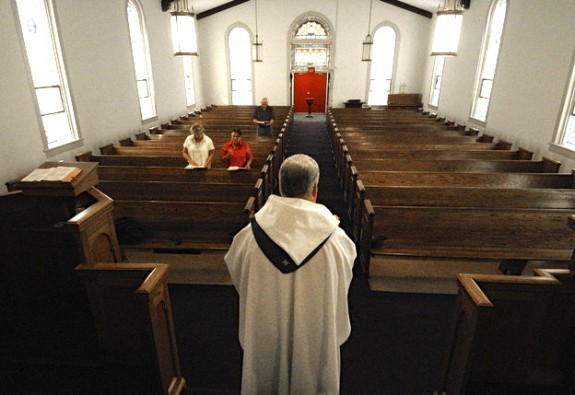 As you can tell from the image above, attendance isn’t exactly S.R.O.

Our first reading Saturday comes from the Book of Kings, with an angel nudging an exhausted and distraught Elijah, telling him to get up and leave.

The Rev. Tom Sanford and his congregation have done just that.

Sanford left the Catholic priesthood more than a quarter-century ago. But now he’s back behind the altar. He’s pastor of a new spiritual community, born out of his frustration with what he believes is the philosophical backsliding of the Catholic church.

Sanford started Blessed John XXIII Ecumenical Church around Easter, and he’s starting small. When he walks down the aisle to “We Gather Together,” three worshippers stand and sing along.

Yet Sanford and his flock say there’s a larger point beyond their small numbers: They have left the Catholic church to become better Catholics.

While millions of followers of the worldwide church vigorously debate Vatican positions on birth control, women, liturgy and the balance of priest-lay authority, the members of the Blessed John church have taken the added step of breaking with Catholic leaders.

“This is a pretty grave act, setting yourself apart from the rest of the Catholic community,” says the Rev. James Martin, author of “The Jesuit Guide to (Almost) Everything.”

Plenty of Catholics disagree with church teachings, he says, “but they don’t leave.”

Sanford says he couldn’t stay. He believes church traditionalists are trying to undermine 50 years of church reforms set in motion by the worldwide councils known as Vatican I and Vatican II.

The final straw came early this year: the church’s decision to reinstate the original 1963 English translation of the Mass. Supporters say the wording better reflects the beauty of the traditional Latin liturgy. Critics call it clunky. More importantly, Sanford believes, it springs from a philosophical retrenchment, “and I couldn’t abide by it.”

So in March he ran a notice in area newspapers announcing a new ecumenical house of faith that would use the previous post-Vatican II liturgy for its Catholic Mass.

Right around Easter, the church opened in the chapel of Jenkins Funeral Home in Newton.

Sanford, after a month of cramming, performed his first public mass in 28 years. Thirteen worshippers attended.

“I had one more than Jesus did for the Last Supper,” he says.

But is this really a Mass?

No, says the Diocese of Charlotte, which serves some 500,000 Catholics in Western North Carolina.

Under church rules, Sanford, who left the priesthood in 1984 to marry, cannot perform the Mass, says David Hains, a spokesman for the diocese. To do so publicly, after giving up his priestly duties, Hains said, is “a grave error.”

It is also sinful for Catholics who “knowingly go to a Mass that’s celebrated by someone who doesn’t have the authority,” Hains says. Nor would that worship fulfill the Sunday obligation for attending Mass.

August 15, 2012
Hope: here's a place where Catholic schools are booming
Next Post

August 15, 2012 When Timothy Dolan danced with the Cosmo queen
Browse Our Archives
get the latest from
Catholic
Sign up for our newsletter
POPULAR AT PATHEOS Catholic
1