Hope: here’s a place where Catholic schools are booming 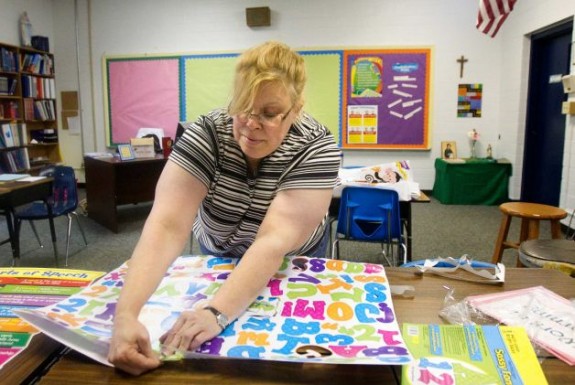 Little by little, Allison Cogburn embroidered her classroom walls with bold, bright letters in shocks of red, green, blue and yellow, with posters reiterating punctuation rules and parts of speech.

On a shelf by the windows, rows of books beckoned, a reminder of the learning to come. On a table near the door, rosary beads symbolized the faith at the center of the school.

As Cogburn decorated her room at Corpus Christi Catholic School on Monday, the halls of the brick building were silent in expectant stillness. But by Wednesday, the first day of the new academic year, the 53-year-old school will vibrate with the chatter of 215 students – an increase of about 7 percent from last year.

Corpus Christi, like many of the 59 schools in the Archdiocese of Galveston-Houston, has seen its enrollment rise at a time when many Roman Catholic schools around the country are struggling to stay open. Just 10 years ago, the school had 137 students; now some grades have waiting lists.

Enrollment in the Archdiocese of Galveston-Houston has hovered around 18,000 since 2005, even as Catholic school enrollment nationwide has dropped.

Catholic school enrollment has seen a steady slide since the 1960s, when it hit 5.2 million in 13,000 schools across the country, according to the National Catholic Educational Association. In 2011-2012, about 2 million students were enrolled in 6,841 Catholic schools.

By contrast, the Archdiocese of Galveston-Houston, which opened St. Theresa Catholic School in 2008 and Cristo Rey Jesuit College Preparatory School a year later, is about to break ground on a high school in Spring.

And as Catholic schools across the Houston area open this week, some are expecting astronomical growth, according to Sister Kevina Keating, superintendent for Catholic Schools of the Archdiocese of Galveston-Houston.

Holy Ghost School in the Gulfton area anticipates a 16 percent increase; Resurrection School in the East End may grow by 55 percent.