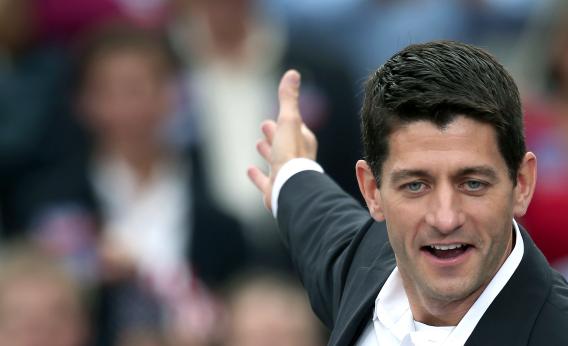 They had to make room for him and some Secret Service agents, too.  Details:

Then he realized the reason they were there: A Secret Service contingent escorting Republican Rep. Paul Ryan, Mitt Romney’s newly named running mate. Ryan went to the south Charlotte church before he and Romney headed off by bus for rallies in Mooresville and High Point. He did so without taking the typical press pool and without notifying any media following the campaign.

“He walked up to me and said, ‘I am Representative Paul Ryan and this is my son.’ I welcomed him to the church, congratulated him on being chosen and told him that we would be praying for him.”

Ryan is the first Catholic on GOP ticket since William Miller in 1964. According to the National Journal, his selection also marks the first time that a presidential ticket will not include at least one Protestant. With Democratic Vice President Joe Biden, it also guarantees the first vice presidential debate between two Catholics.

St. Gabe’s was still buzzing about the appearance at the 10:45 mass. Parishioner Simon Tsai was in the congregation when the priest anounced that the early service had a surprise visitor.

“The whole parish just applauded sponstaneously,” Tsai recalled. “You can tell the enthusiasm.”

Tsai, a businessman, was impressed himself. “It surprises me that he actually went to Mass, especially when it’s not a photo op,” he said. “It’s not just for show.”

But then again, maybe I shouldn’t be surprised after all.

Meantime, a deacon reader dropped me an e-mail to note that someone, somewhere would probably grumble that the Ryan event was little more than a “photo opportunity.”

If so, it was an epic FAIL.

I searched online and couldn’t find a single photo of the event.  At all.

Meantime, The Anchoress has a good roundup of the Ayn Rand kerfuffle — which, in Motown, might be dubbed “Lizzie Scalia and the Pips.”  Check it out.

FTR, Joe Biden was at the 5PM Mass at St. Mary of the Lake Parish in New Buffalo, MI on 7/28. He was extremely unobtrusive, drawing zero attention to himself, slipping out with his Secret Service entourage at the very end of Mass. If my wife and I hadn’t been sneaking out during the last hymn, we wouldn’t have known he was there until it was in the bulletin the following week:

It was indeed a privilege having the Vice President of the United Sates of America, Joe Biden, worshipping with us last weekend at our Saturday Vigil Mass. As you can imagine, we were under a very high security alert. I personally knew a few hours a head of time, but was asked not to make Vice President Biden’s presence public because of security reasons. Praise be Jesus Christ that so many visiting our wonderful area this summer season are keeping the Sabbath Day holy by attending Holy Mass. This is always a reminder and a great witness to all of us that we too need to keep our Mass obligation when traveling, on vacation, or at home.

August 14, 2012 Dolan: Why I invited President Obama to the Al Smith Dinner
Browse Our Archives
get the latest from
Catholic
Sign up for our newsletter
POPULAR AT PATHEOS Catholic
1