“Ecclesiastical authority regards female ordination, even to the diaconate, with grave reservations…” 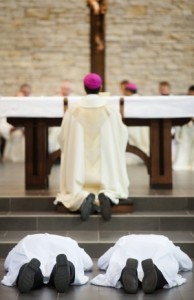 The Congregation for the Doctrine of the Faith’s 2008 visitation of a latae sententiae excommunication on those attempting to ordain women to the diaconate represents, I suggest, something more than a temporary disciplinary measure against prematurely implementing a sacramental development that might, in fact, never come. That such a severe sanction is levied at all suggests to me that some very significant—if not yet formally defined—values are being protected thereby.

Consider: sanctions for the invalid and/or illicit conferral of sacraments are relatively few in number, at least when compared to the total number of ways that such conferrals can be abused. Specifically in regard to ordination, only the illicit conferral of episcopal orders contrary to Canon 1382 is punished with excommunication; other violations of law in the context of ordination (say, conferral of orders without proper dimissorial letters, per c. 1383) carry lesser penalties. The same lighter touch marked the Pio-Benedictine Code (see, e.g., 1917 CIC 2364).

Therefore, it seems to me that the CDF excommunication for attempted female ordination (especially in light of the roll-back that excommunication has undergone over the last 150 years) should be taken as a sign that ecclesiastical authority regards female ordination, even to diaconate, with at best grave reservations; the enactment of such a sanction certainly does not suggest that female diaconal ordination is coming, and that all we need is time to work out the details.

He has much more.  Read it all.

September 23, 2012 A doctor's witness: "I get to see the likeness of God every day"
Browse Our Archives
get the latest from
Catholic
Sign up for our newsletter
POPULAR AT PATHEOS Catholic
1