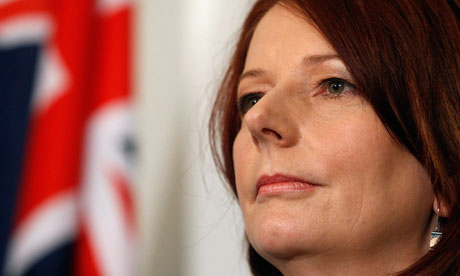 This is roughly the equivalent of an American president — or, perhaps, the Attorney General—ordering an investigation into the Catholic Church hierarchy in America.

Australia’s prime minister ordered a federal inquiry Monday into allegations of child sex abuse in state and religious institutions and community groups following a string of sexual abuse accusations against priests and claims of a Catholic Church cover-up.

Prime Minister Julia Gillard had faced mounting pressure to order a wide-ranging investigation after the New South Wales state premier last week ordered an inquiry into allegations of a sexual abuse cover-up by Catholic priests in the Hunter Valley region north of Sydney. Victorian officials are also investigating a separate series of priest sex abuse allegations in their state.

“Any instance of child abuse is a vile and evil thing. Australians know that,” Gillard told reporters in Canberra. “Australians know, from the revelations that they’ve read in recent weeks, that too many children have suffered child abuse but have also seen other adults let them down. They’ve not only had their trust betrayed by the abuser, but other adults who could have acted to assist them have failed to do so.”

The investigation will target religious and state institutions, schools and community groups such as sporting clubs. It will also look into police responses to abuse allegations and is expected to take several years to complete.

Last week, New South Wales ordered a state inquiry after a veteran police detective wrote an open letter to the premier accusing the Catholic Church of thwarting his attempts to investigate child sex abuse allegations in the Hunter Valley.

Detective Chief Inspector Peter Fox, who spent years investigating abuse allegations in the Hunter region, said the church destroyed evidence, silenced victims and shuffled around accused priests in a bid to cover up abuse. There have been hundreds of allegations of abuse by priests in the region since the mid-1990s.

Sydney Archbishop Cardinal George Pell, Australia’s highest-ranking Catholic official, has previously said he thought a federal inquiry would be a “disproportionate” attack on the church. But in a statement Monday, he said the church would cooperate with the inquiry, adding he hoped the investigation would unveil the truth.

November 11, 2012
Report: many Catholics use social media, but few follow blogs on the Church or faith
Next Post

November 12, 2012 NY Times new president is a practicing Catholic who believes in "objective truths"
Browse Our Archives
Follow Us!