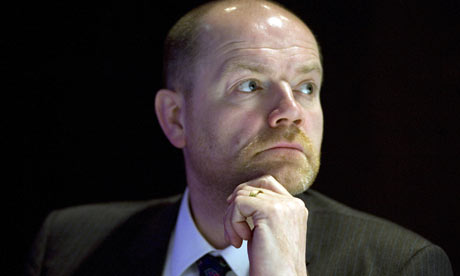 From A Journey Through NYC Religions:

Tomorrow, Mark Thompson takes over as the new President and CEO of The New York Times. Thompson is a practicing Catholic who believes “that the truths of the Christian faith are objective truths, rather than being entirely subjective.”

The position is primarily focused on running the business aspects of the Times. Thompson turned the British Broadcasting Company into a global online media powerhouse, and the Times management feels that he could do the same here.

Soon after, Thompson left the BBC, a scandal broke out over how the British media enterprise had handled charges of pedophilia made against Jimmy Savile, one of its most famous show hosts in an earlier era. Thompson says that he did not know specifically how BBC news was handling the Savile scandal, though he was told that a program exposing Savile was shelved shortly before his media enterprise ran a celebratory program about Sevile. At the Times journalists say that they will ask Thompson if he did all he could to get to the bottom of the Savile affair. Did he live up to his Catholic ethics to protect the vulnerable? Or did he stick his head in the sand?…

Below are some of the most interesting points and the full interview in the video provided by Ash’s organization freespeechdebate.com.

“Almost all people who have religious belief are realists about the belief…They believe their faith refers to things that have an objective reality.”

Mark Thompson is in the realist camp.

“I am a practicing Catholic, and I would probably describe myself as a critical realist in religious matters but I’m a realist and I believe, as it were, that the truths of the Christian faith are objective truths, rather than being entirely subjective.”

Secularism is on the decline.

“Around the world, it would appear that, if anything, secularism is rather in a decline actually.

Because secularists privilege their beliefs on the public square, they often don’t understand the deep offensiveness of their ridicule of religious belief.

“One of the mistakes of secularists is not to understand the character of what blasphemy feels to some one who is a realist in their religious beliefs…For a Muslim a comic or demeaning depiction of the Prophet Mohammed might have the force, be the emotional force, of a piece of grotesque child pornography…Religion as it is lived is not simply about a kind of interplay of propositions , two plus two equals four versus two plus two equals five. It is a felt experience with a big emotional charge.”

November 12, 2012 "Will you join in our crusade...?"
Browse Our Archives
get the latest from
Catholic
Sign up for our newsletter
POPULAR AT PATHEOS Catholic
1

Greater Effectiveness Through Love -
Francis de Sales was a leader in a time of tremendous division. As...
view all Catholic blogs
Copyright 2008-2020, Patheos. All rights reserved.