Report: many Catholics use social media, but few follow blogs on the Church or faith 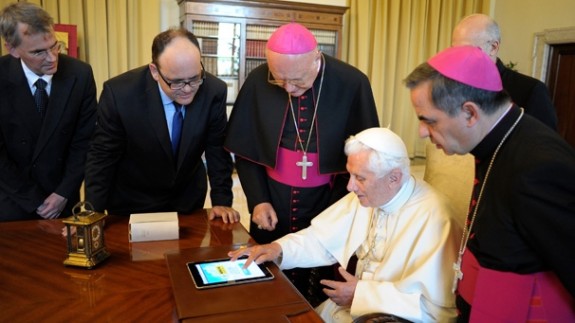 Here’s the press release from the USCCB for the report connected with the blogging encounter the Patheos Posse attended Sunday:

Sixty-two percent of adult U.S. Catholics, representing an estimated 36.2 million people, have a profile on Facebook; 58 percent of Catholics age 30 and under share content such as pictures, articles and comments at least once a week on social media; and nearly a third of all surveyed said they would like their pastors and bishops to blog, according to a newly-released study by the Center for Applied Research in the Apostolate (CARA) at Georgetown University.

“Catholic New Media Use in the United States, 2012” surveyed 1,047 self-identified Catholics from September 10-18. The study was released November 11 at “An Encounter With Social Media: Bishops and Bloggers Dialogue,” an event sponsored by the Department of Communications of the U.S. Conference of Catholic Bishops (USCCB) in conjunction with the U.S. bishops annual Fall General Assembly in Baltimore.

“The CARA report suggests many opportunities for the Church to engage with those who live on the ‘Digital Continent,’ as Pope Benedict XVI describes this new culture of communications,” said Bishop John Wester of Salt Lake City, chairman of the USCCB Committee on Communications. “We can approach this as missionaries, eager to find God already present among the inhabitants of this world and to engage them, especially young people, in meaningful dialogue about morals and values in this new public square.”

“In this context, the role of the laity becomes ever more central,” said Archbishop Claudio Celli, president of the Pontifical Council for Social Communications, in a message to the bishops and bloggers gathered in Baltimore. “The ‘voices’ of the many Catholics who are present in blogs, social networks and other digital forums are reaching people who might not otherwise encounter the message of Jesus.”

Nineteen percent of Catholics 30 and under reported sharing content on social media at least once a day. Women were more likely than men to post daily (17 percent to 9 percent), and the most popular social networking sites for daily posters were Tumblr (50 percent), Instagram (44 percent), and Twitter (34 percent).

Two-thirds of adult Catholics (68 percent) indicate that they visit YouTube. That number rises to 84 percent among Catholics age 30 and under. According to the report, the fact that 43 percent of Catholics born before 1943 still visit YouTube represents the popularity of the site, which ranks only behind Google in online traffic. Respondents who took the survey in Spanish were just as likely to visit YouTube as those who took the survey in English. Only 6 percent of respondents said they visited YouTube to view religious content. This rose to 17 percent among weekly Mass attendees.

Eight percent of adult Catholics who regularly use a digital device indicate that they use at least one Catholic-related application on these. Five percent (or 2.9 million people) read or follow blogs on the Catholic Church, faith, or spirituality. Among weekly Mass attenders, 13 percent read or follow blogs on the Church. Of those who read these blogs, 72 percent said they do so to learn more about the Church’s teachings and their faith, and 71 percent said they do so to stay up to date on news of the Church.

The top three concerns cited by respondents for the Church’s presence online were the lack of a system for the Church to validate sites and content as authentically Catholic (45 percent), the lack of civil tone in conversations happening on the internet (43 percent), and the reluctance by Catholic Church leaders to use the Internet (42 percent). About a third agreed that they want their pastor (33 percent) and their bishop (31 percent) to blog. A third of adult Catholics represent about 19 million individuals.

The adult Catholic population is nearly evenly divided by those aware of the Church’s presence online and those who are not aware of this. About a quarter (24 percent) indicated said the Church is “somewhat” or “very” visible, while another quarter said it is “only a little” or “not very” visible (23 percent). More than half (53 percent) were unaware of any significant presence.

The Catholic website most often visited regularly by self-identified adult Catholics is their parish website. Currently about one in 10 (9 percent) say they visit this once a month or more often. This is equivalent to 5.3 million individuals.

Eighty-four percent of respondents took the survey in English; 16 percent took it in Spanish. Every percentage point of the total sample represents approximately 583,000 adult Catholics. The USCCB Department of Communications commissioned the study with assistance from the Catholic Communication Campaign.

You can find a link the entire report here.

Fifty Years Ago, If a Guy...
Steel Magnificat
Books by This Author Books by Deacon Greg Kandra