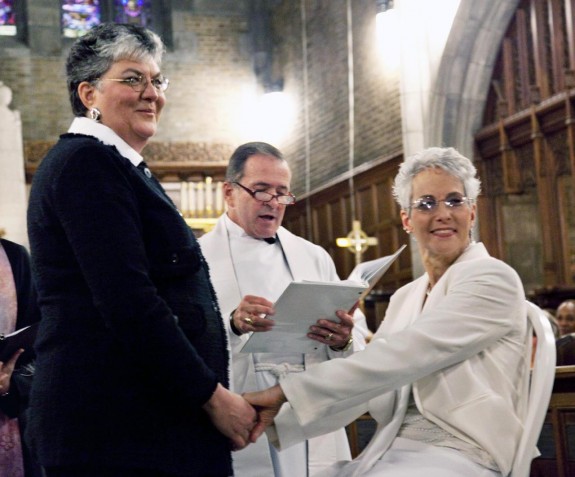 Cadet Chapel, the landmark Gothic church that is a center for spiritual life at the U.S. Military Academy at West Point, hosted its first same-sex wedding Saturday.

Penelope Gnesin and Brenda Sue Fulton, a West Point graduate, exchanged vows in the regal church in an afternoon ceremony, attended by about 250 guests and conducted by a senior Army chaplain.

The two have been together for 17 years. They had a civil commitment ceremony that didn’t carry any legal force in 1999 and had long hoped to formally tie the knot. The way was cleared last year, when New York legalized same-sex marriage and President Barack Obama lifted the “Don’t ask, don’t tell” policy prohibiting openly gay people from serving in the military.

The brides both live in New Jersey and would have preferred to have the wedding there, but the state doesn’t allow gay marriage.

“We just couldn’t wait any longer,” Fulton told The Associated Press in a phone interview Saturday.

Cadet Chapel was a more-than-adequate second choice, she said.

“It has a tremendous history, and it is beautiful. That’s where I first heard and said the cadet prayer,” Fulton said, referring to the invocation that says, “Make us to choose the harder right instead of the easier wrong, and never to be content with a half-truth when the whole can be won.”

The ceremony was the second same-sex wedding at West Point. Last weekend, two of Fulton’s friends, a young lieutenant and her partner, were married in another campus landmark, the small Old Cadet Chapel in West Point’s cemetery.

I was kind of surprised when I read your article about West Point’s Chapel having its first gay marriage there. The ironic thing is, even though the AP thought that it was newsworthy, I can almost guarantee you that almost every cadet has absolutely no idea that this just happened, and will have no idea unless they just stumbled onto your article like I did. This does make sense, seeing as how I’ve never heard of any wedding at the academy being announced to cadets, but still, it’s weird to think about.

Anyways, if anyone is worrying about this one being performed in a Catholic Chapel, they can relax. The “Cadet Chapel” means the larger, Protestant church. What is known as the “Cadet Catholic Chapel”, Most Holy Trinity Church, is a completely different building in a different part of West Point. It’s actually a fairly small-sized church compared to the small cathedral-sized Cadet Chapel.

December 2, 2012 Why every deacon needs to read the pope's latest letter
Browse Our Archives
get the latest from
Catholic
Sign up for our newsletter
POPULAR AT PATHEOS Catholic
1

144: Where is the True Church? (w/ Erick...
In this episode of The Cordial Catholic, I'm joined by Erick Ybarra,...
view all Catholic blogs
Copyright 2008-2021, Patheos. All rights reserved.