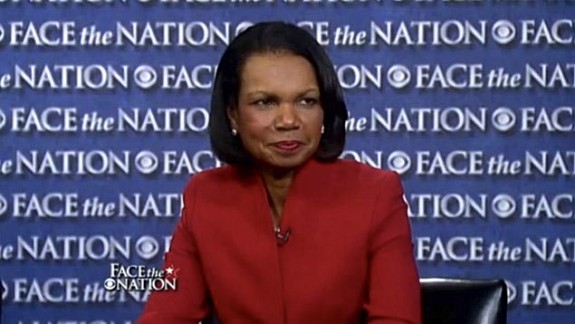 Quite a coup for the network:

Former Secretary of State Condoleezza Rice has joined CBS News as a contributor — just in time for inauguration coverage.

Rice, who served as secretary of state during President George W. Bush’s second term, made her debut on the network’s “Face the Nation” program Sunday and will be included in inauguration coverage on Monday.

CBS News Chairman Jeff Fager and president David Rhodes made the announcement Sunday, saying Rice “will use her insight and vast experience to explore issues facing America at home and abroad.”

Rice was the first African-American woman to serve as secretary of state, following Colin Powell in the office. She was Bush’s national security adviser during his first term and worked on the National Security Council under his father, President George H.W. Bush.

January 21, 2013
I'll drink to that: new pubs pledge profits to charity
Next Post

January 21, 2013 At Biden swearing in: "Walk humbly with your God..."
Browse Our Archives
Follow Us!