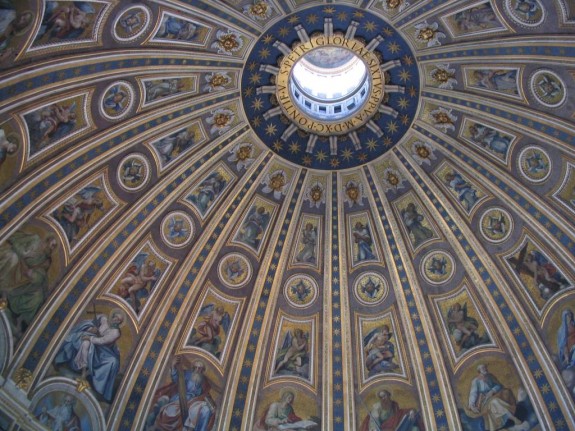 Charles Redfern spills the beans over at HuffPo:

It’s time I come clean. I’m an evangelical with a secret. A covert “real me” peaks from the shadows and longs to leap into the sunlight. World events compel me to throw caution to the wind and blare my confession: I’m a wanna-be Catholic.

There. I feel better.

Many are issuing calls for reforms as the cardinals convene. I have my own wish list rooted in the usual historic Protestant complaints, but the announcement compels me to dwell on what I admire. There is much to appreciate.

First, the Roman curia’s politics are delightfully confusing. Many go slack-jawed in their efforts to cram the mitered eminences into modern partisan categories. They don’t fit. Witness Pope John Paul II: He swung left in decrying America’s decadence, right on abortion, left when the U.S. invaded Iraq, right in his opposition to liberation theology, left on climate change and left on the death penalty. The political “experts” perched before the cameras and “analyzed” his “inner motives.” Was the pontiff moody? Mercurial? Intellectually unbalanced? What’s his game and to which constituency was he appealing and how would this play in Peoria?

Believe it or not, most Catholic leaders are not mugging for the cameras. They’re doing their level best to preserve a 2,000-year tradition that defies modern pigeonholes. Only a fraction of the world’s 1.2 billion Catholics live in America, so they’d be mining data from the global south if they were market-driven leaders; but, more to the point, they know their Church survived persecution, the Arian heresy, Docetism, Donatism, the fall of the Roman Empire, the Dark Ages, the Middle Ages, the Black Death, the Reformation, the Renaissance, the French Revolution, Fascism and Communism. They lionize sacrificial martyrs, not question-dodging candidates. Right-wing death squads murdered Latin American priests, nuns and bishops; left-wing Eastern European despots threw them into prisons — and they remember who got the last laugh at Stalin’s question: “How many divisions does the pope have?”

For all their huge flaws (covering up priestly pedophilia will rank high on their scandal list), most cardinals and bishops view their Deity as their commanding constituency. Their Church has outlasted civilizations and empires — and the mighty USA is a smart-aleck toddler smoking a cigar. Don’t take it personally, Peoria. We love you and we pray for you, but your finite wishes pale when compared with an infinite Being’s.

Come on in and swim the Tiber, Rev!  The water’s fine!