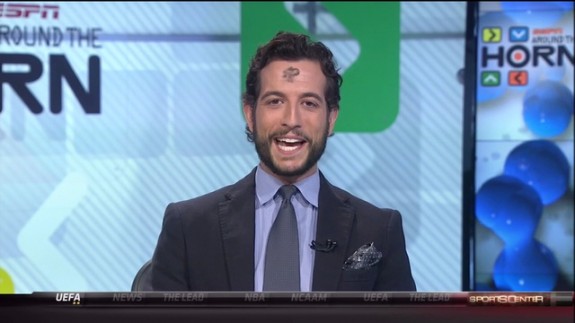 Ash Wednesday still befuddles some people (and, evidently, offers a few spelling challenges.)  The headline comes from Twitter, and reaction to the image above, seen yesterday on countless TV screens. The website Deadspin notes:

For years, Around The Horn host Tony Reali has proudly worn the mark of Ash Wednesday upon his forehead while hosting that day’s program. While other talent on other networks might not have such freedom, Reali’s clearly a person who both believes strongly in his faith and works on a program that doesn’t take itself too seriously. We think that’s great, seriously. However, fans of the program who lack knowledge of various Catholic rituals get thrown for a loop, despite Reali a) doing this every year and b) generally explaining why he’s wearing his ashes.

Visit the link for some Twitter reaction—not all of it kind.

February 15, 2013 Cardinal Mahony: "I am being called to be humiliated..."
Browse Our Archives
Follow Us!