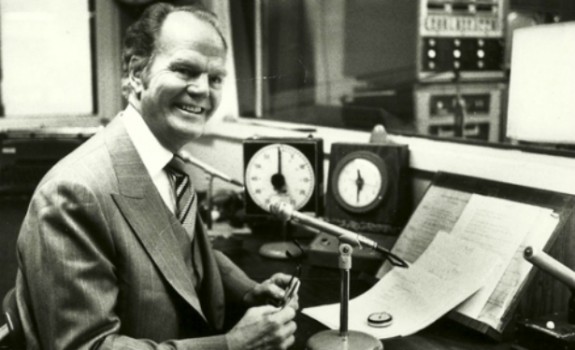 Those who loved the Dodge RAM/Paul Harvey Super Bowl ad — “So God made a farmer”—will appreciate this remembrance of the great radio personality by another great radio personality, Larry McCoy.  Larry hired me as a writer when he was the News Director of CBS Radio back in the 1980’s.  He posted the following on his Facebook page yesterday.  I repost it here with his permission.  DGK.

It was the biggest office I had ever seen. The carpet, the longest. That maroon beauty could have covered a football field. Standing at his desk where the goal posts would be was Paul Harvey, ABC Radio’s superstar. He walked 50 yards to meet me, extended his hand and said, “Welcome aboard.”

The Chicago Bureau Manager had been kind enough to escort me from his suitcase of an office into Harvey’s after telling me I had a job waiting at ABC News in New York. Thousands, including my dad, never missed Paul Harvey’s midday broadcast. If you stopped at a traffic light in the Midwest on a hot summer day before cars were air conditioned, Harvey’s deep, distinctive staccato was heard through the open windows all around you.

Harvey was a news entertainer – years before the ever-smiling Ken and Barbie were cloned for display on local TV across the country- a solo act who read for 15 minutes a riveting mix of hard news, funny stories, commercials, clever bumper stickers, advances in medicine, farming, and technology, quotes from the Rev. Billy Graham, praise for his wife “Angel” and accounts of where he and his “traveling microphone” were or were headed next.

There were no sound bites. It was all Paul Harvey talking, and all of it done like no one else did it. Harvey truly knew how to write for the ear. Repetition was one key. He repeated things – a word, a sentence or a phrase leading up to a punch line or a preposterous statement by a politician or bureaucrat. And the Harvey pauses. No one I’ve ever heard on the radio used the pause so effectively or so often. There were long pauses between stories and in the middle of stories. After some pauses, you thought you were about to hear a new story, but no, he wasn’t done with the previous one and hit you with the punch line or with an even more ludicrous comment from the moronic politician or bureaucrat of the day. The repetitions and the pauses gave listeners time to let things sink in.

A year or so after walking across his fine carpet, I was a copy editor in New York, engaged in occasional phone battles with Harvey’s producer over news out of Vietnam. The calls were made when there was a story that I thought absolutely had to be on Harvey’s midday newscast. At the height of the war, New York anchors crammed their Vietnam stories with specifics about casualties, armaments and geography, most of which were probably lost on listeners. After one of my calls, Harvey said something like this on the air:

“Big battle near Da Nang today. Some dead, some wounded. Some of theirs, some of ours.”

That was indeed the story I had asked Harvey to include, and he told it better and tighter (always important in radio) than anything we would have churned out in Manhattan. After that, I tried to limit my calls to Chicago. (Yes, I use to bitch about Harvey doing too many unimportant stories. But he had 15 minutes to fill all by himself, and he didn’t go bonkers over or on and on about the couplings or uncouplings of smutty starlets and airheads. Plus he wrote so damn well that you knew something that would catch your interest was only a pause away.)

February 7, 2013 It's come to this: dad pays teenage daughter $200 to quit Facebook
Browse Our Archives
get the latest from
Catholic
Sign up for our newsletter
POPULAR AT PATHEOS Catholic
1