Are women already running the Church? 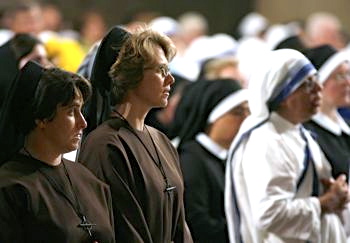 An interesting perspective from writer Ashley McGuire in the Washington Post:

With the Catholic Church at the forefront of international news given recent events, many are using the opportunity to frame the Vatican and the Catholic Church more broadly as a place that excludes women. The next pope will be a man elected by 115 men, therefore women must have no role in the life of the faith, the logic goes.

I returned to my home for the next week, a friend’s apartment, with two cappuccinos in hand. My friend, a woman, is studying to be a canon lawyer, an ecclesiastical role that entails tremendous authority in adjudicating church matters.

When we couldn’t figure out the credentialing process, she called a friend who is a Vatican journalist, or a Vaticanista as they are known around here. But she was too busy carting around journalists and cardinals.

So I emailed an American friend, a woman, who is a Catholic journalist. She referred me to “the Americans” in Rome, two of the more media savvy ones, also women.

Later in the morning, as I walked to the Vatican, I slipped coming down a step. The young nun passing by, gave me gave a friendly laugh, her veil lifted in the breeze and a blonde curl peeking out from the front.

I was on my way to meet another friend, Carolina Rea, who works in the office for the Patrons of the Arts in the Vatican Museums. She greeted me at St. Ann’s Gate, and as she shuttled me through the door of the Apostolic Palace, a Swiss Guard quietly saluted her.

She led me through the San Dammasso Courtyard, where the flagpoles stood barren because of the sede vacante. As we walked down a long hallway, empty but for the silent scuttle of painters, faint laughter could be heard around the corner. As we turned and entered her office, Carolina pushed back the door and female laughter burst out onto the stone. There stood four women, one of whom smiled and stretched out her hand, joking that, “this is where we have all the fun.”

One by one, I spoke with these women, asking them especially about life as a woman in the Vatican. When I told Sara, an Italian mother of two, that many in the American press have an impression that women are underrepresented in the Vatican and the Catholic Church, her eyebrow arched with suspicion and she leaned back, almost as if offended. “No,” she said. “Maybe twenty years ago.” (She was working at the Vatican then as well.) “Very important women are leading Vatican offices. Women are very, very important [here].”

“We have a special place here. Because so many of the men here are priests, we have a different form of brightness and character that we come in with, it’s lightened the mood and the ambiance here.”

The women pointed out that the growing presence of women in the Vatican has led to a very pro-family environment. The Vatican, whose workforce is approximately 40 percent female, has a very progressive maternity leave policy, allowing women paid leave beginning two months before their due date and allowing them a year of paid leave after birth. When the women return, they are allowed to create a “milk schedule” so that they can structure their hours around their nursing needs.

March 9, 2013 Welcome to the first "virtual conclave"
Browse Our Archives
Follow Us!