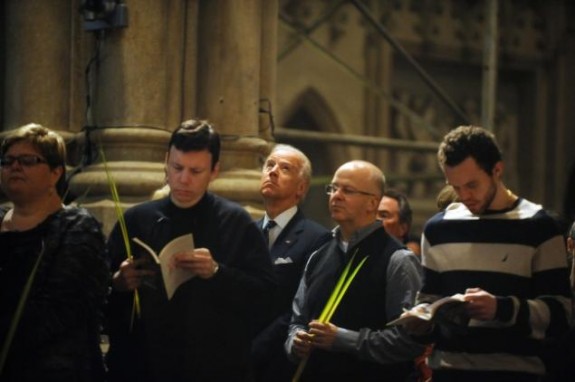 And before anyone asks: yes, he evidently did receive communion.

At a time when the administration is being sued by Dolan and the Catholic Bishop’s Conference over the Obama health care provision on birth control, the meeting was seen as an attempt to create a new dialogue.

An Irish American Catholic, Biden receiving communion was also seen as significant. Dolan’s predecessor Cardinal Edward Egan refused to give communion to those who differed with the church on the abortion issue.

Biden says he is pro-life but will not seek to impose his views on others.

Biden met with Cardinal Dolan after the mass for coffee but what they discussed was not made public.

Biden’s latest move comes at a time when the Obama administration appears to be using the VP in a new outreach to American Catholics.

“We welcome the vice president of the United States, Mr. Biden, we welcome him here,” Dolan told parishioners, celebrating the start of Holy Week at St. Patrick’s Cathedral. “You have a place in our thoughts and prayers.”

Many were craning their necks to get a good look at Biden, who was all smiles during the Sign of Peace, shaking hands with dozens of people and telling them, “Peace be with you.”

“He was very respectful. He sat in the rows with everyone else and didn’t bring any attention on himself,” said parishioner Marie Griffin, 50, of Yonkers.

March 25, 2013
How Diana's funeral marked a return to "Catholic" England
Next Post

March 26, 2013 Vatican releases text for Pope Francis' Way of the Cross
Browse Our Archives
get the latest from
Catholic
Sign up for our newsletter
POPULAR AT PATHEOS Catholic
1