You can’t make this stuff up:

Spokane’s Gonzaga University has denied a Knights of Columbus group application to be recognized as an official student organization. Those seeking the status were notified of the University’s decision at a meeting on March 7. 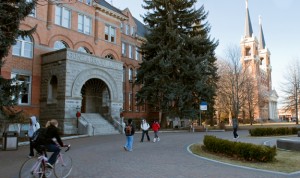 The group was notified of the decision by Dean of Students Kassi Kain and Assistant Director for Student Activities Dave Rovick.

“The Knights of Columbus, by their very nature, is a men’s organization in which only Catholics may participate via membership,” says a letter obtained by The Cardinal Newman Society written by Sue Weitz, Vice President for Student Life. “These criteria are inconsistent with the policy and practice of student organization recognition at Gonzaga University, as well as the University’s commitment to non-discrimination based on certain characteristics, one of which is religion.”

The discussion at the meeting touched on formation of a Catholic Daughters student organization at Gonzaga. Such a group would address the gender exclusivity issue. However, it would not address the requirement that all members of a student Knights of Columbus group must be Catholic.