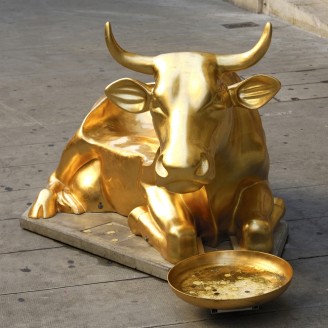 It’s a weird thing to do, but I have to start this post on the evil of idols by talking about my idol.

Her name is Elizabeth Scalia.

She’ll hate that. She can’t stand it when people make a fuss over her. And she’ll be the first to tell you she’s a miserable, worthless, slobbering old sinner, not really prime idol material.

No. She’s wrong. Truth be told, she is someone the world needs to hear—someone who defies labels (and, she might be pleased to hear, someone who giddily smashes them on the ground) and who calls us back to our roots as children of God, adherents of the commandments, and followers of The Way. She does that astonishingly well with her new book, “Strange Gods: Unmasking the Idols of Everyday Life.”

More on that in a moment. First, some background.

The fact is—as I like to tell people—I knew the woman we call “The Anchoress” before she took the veil. We first “met” about 15 years ago; fittingly it was online. Back in the days before blogs and Facebook and tweets, we both found ourselves at a Catholic online forum that engaged people of various ideas and orthodoxies in discussing everything from birth control to papal infallibility to the theology of baseball (of which, of course, Elizabeth was an expert.) Back then, always the shy and wary type, she used another internet name and spent a fair amount of time grumbling about housework, raising kids, and trying to make sense of a faith that to many of us (even the most devout) can seem capricious or even illogical. She was feisty, ferocious, fervent, funny. And she was a die-hard New Yorker. I was smitten.

After I was eviscerated online by some of my charitable Catholic cohorts— I can’t remember the issue, it may have been something about contraception, always a hot topic—she dropped me an e-mail that was, in effect, a friendly “there, there” pat on the head. She understood where I was coming from. Been there, done that. And she wanted me to know I wasn’t alone and that a little patience and prayer and maybe a hot toddy – her solution for everything – would make me feel better. Soon after that, we became e-mail buddies, swapping snark over every random oddity that popped up in the news. What a time it was. We survived 9/11 together—hers was one of the first communications I got from anyone, anywhere, asking, “Are you okay?” – and personal triumphs and setbacks that are the markers of every life. She became a good friend. In time, a seed was planted. Her prayerful devotion to St. Benedict enticed me to pursue becoming a Benedictine oblate, which led me to discovering the Lay Cistercians, which led me in a roundabout straight-writing-but-crooked-lines way, to becoming, ultimately, a deacon. (Yes, it’s her fault.) Across the years, she’s been my big sister, my mentor, my Jiminy Cricket, my hero, my scold.

And yes, my idol.

And her writing is a big part of that. Long before she became a crackerjack essayist and online provocateur, she was posting pithy and hilarious and brilliantly creative paragraphs in that online forum—short screeds that raised eyebrows and raised hell. And she never failed to get at some startlingly obvious truth about love or mercy or grace that had somehow eluded the rest of us. People loved her. They hated her. They endured her. Most importantly, they read her. 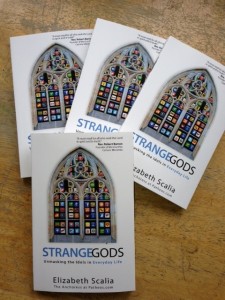 I adored her. I still do. Which is why it is impossible for me to write objectively or dispassionately about her new book, “Strange Gods,” without feeling a tremor of nostalgia and more than a little awe. The snarky old Scalia I knew 15 years ago has become an astonishingly gifted observer and eloquent wordsmith. And she brings to this project, her first book, a devastating thesis: the very first commandment—you will have no strange gods before Me—is the most important, yet it’s the one we perpetually break, and we don’t even realize it.

Here we are, nervously eyeing some of the other, more shame-inducing commandments—including, let’s face it, everyone’s favorite, #6—while the most serious one has been there all along and we’ve all just ignored it. We’ve gone about our lives, creating what Elizabeth calls “godlings” and idols that include politicians and ideologies; we’ve molded our own golden calves of own prejudices and peculiarities; we’ve burned incense to invisible entities that even include, yes, the Internet.

“The Internet might well be the greatest tempter to ego gratification since the hissing serpent of Eden. As such, the Internet is a most cunning inducement to idolatry. Like any good trap, it seems so very passive. We discover it with delight; we engage, we become adept (in some cases, addicted) and are perpetually distracted. The evil one loves distraction—aims for distraction—because it is the means by which we lose track of God and dwell among the idols.”

And that’s just for starters.

Again and again in this elegant little book, Elizabeth nails it. She nails us. All of us. The ambitious, the lazy, the distracted, the deluded, the naïve. We all have golden calves of some sort erected to strange gods we may not even be able to name.

For one thing, there is the idolatry of an idea:

We cling to resentment or feed jealousy until it grows into something we burnish daily with our justifications. We get it to glitter in our minds like something alive, like a genuine force outside of ourselves. We go so far as to proselytize our grudges to others through spin, gossip and even lies—see my anger, my resentment, my jealousy and my spite! Even if a murderous thought lasts for but an instant, allowing it—and a thousand ideas like it—can be compared to shaking dandelion fluff. It is visually gratifying to let the wispy seedlings blow about, but eventually weeds take root.

There are other gods, gods of envy, or insecurity, or anger, or despair—all those things that keep us from turning our gaze to the God who is the One, and who merits all our love and praise. How can we properly worship Him when we’re busy slaughtering lambs on Facebook? How can we give God His proper due when we are polishing metallic icons to things like sex, politics, even our own future plans? In the final chapter, she even writes about the idols in her own life. She spares no one.

I’m tempted to call her a prophet – again, she’ll hate that. Or a visionary. But Elizabeth Scalia is perhaps something both more ordinary, but also more profound. Like I mentioned earlier: she’s Jiminy Cricket, the voice on the shoulder, the whisper in the ear, the companion on the journey who makes us question, examine, study, ponder—and grow.

Over the years, I’ve grown a lot thanks to my friend Lizzie. Now, with this beautiful and searing book, I think others may be given the chance to grow, as well. “Strange Gods” challenges us, surprises us, and ultimately uplifts us. It’s a gift.

Of course, after taking her advice to heart, now I’ll have to take down that golden calf in my office that I’ve named “Lizzie.” 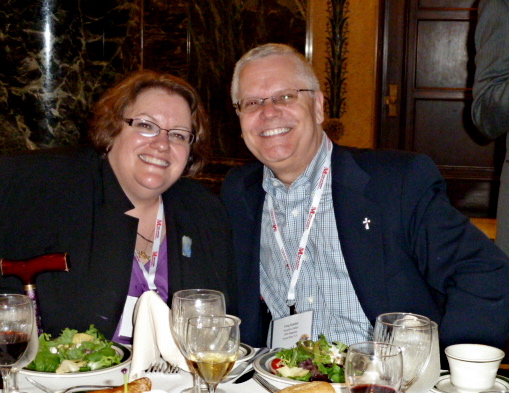 June 1, 2013 Beauty and the Priest: Revisiting a 50-year-old Texas Murder Case
Browse Our Archives
Related posts from The Deacon's Bench