Remembering Fr. Scott Carroll: “He wanted to be a priest”

Remembering Fr. Scott Carroll: “He wanted to be a priest” May 12, 2013 Deacon Greg Kandra

Here, from the Toledo Blade, is the obituary for the man who was a priest for just 40 hours:

The Rev. Scott R. Carroll, who sustained his interest in becoming a Roman Catholic priest through an 18-year career as a middle school teacher and coach, died Friday in the Maumee home of his father, Robert. He was 46. 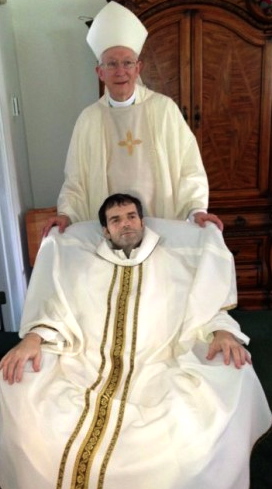 In December, Father Carroll learned that melanoma first treated more than a year earlier had recurred and was inoperable, his brother Patrick said.

He received care afterward at the University of Michigan.

“He had incredibly deep faith. He was comfortable with it,” his brother said.

“He wanted to be a priest. That was the plan, and we talked about it. He was going to continue down the path, and that was his focus. He loved it. He had no doubts.”

The plan included ordination June 22 with his class.

But a recent scan showed how aggressively the cancer had grown, his brother said. Ordination was scheduled for Friday at Rosary Cathedral even as he weakened.

“There was a real fear he wasn’t going to make it to Friday,” his brother said.

By late Wednesday morning, Toledo Bishop Leonard Blair was at the Carroll home and presided at an ordination Mass, concelebrated by the Rev. Keith Stripe, pastor of St. Joseph Church, Maumee – where Father Carroll was a third-generation parishioner – and Msgr. Charles Singler, diocesan vocations director.

“It was very bittersweet,” Father Carroll’s brother said. “He wanted to be a priest, and he was a priest. It was beautiful, but very sad.

“After the ceremony, Bishop Blair went over to him and took off his miter and bowed down and said, ‘Scott, will you give me your blessing?’ Scott was weak. He was in a chair. He put his hand up and gave an amazing blessing to the bishop.”

He was born Aug. 5, 1966, to Patricia and Robert Carroll and grew up on a farm in Waterville Township.

He held his interest in the priesthood through studies that led to a bachelor’s degree in education and a master’s degree in history from the University of Toledo.

“There was always that spark,” his brother said.

He taught social studies and coached football at Swanton Middle School until 2006.

He was mild-mannered, good-natured, and thoughtful – and in the classroom and on the sidelines, “he wouldn’t get run over,” his brother said.

“He earned respect from people. He didn’t often have to raise his voice,” his brother said.

“He had an impact on Swanton. It seemed we couldn’t go to a restaurant or a shop without running into somebody who was a student.”

As he mulled the calling he felt, he took long walks through Oak Openings Preserve Metropark.

“He decided to become a priest hiking through Oak Openings,” his brother said.

Father Carroll had a master of education administration degree from the University of Dayton and master’s degrees in Catholic thought and in divinity from St. Meinrad.

He’d been an adviser of the Anthony Wayne Trailblazers 4-H Club.

He and his brothers attended football games together, his loyalties running to the UT Rockets, the Ohio State Buckeyes, and the Cleveland Browns.

Surviving are his father, Robert Carroll, and brothers, Patrick and Timothy Carroll.

Visitation will be from 1 to 8 p.m. Monday in St. Joseph Church, Maumee, with a vesper service at 7:30 p.m. Monday. Funeral services will be at 11 a.m. Tuesday in Our Lady, Queen of the Most Holy Rosary Cathedral, where the body will be after 9 a.m.

Arrangements are by the Maison-Dardenne-Walker Funeral Home.

May 12, 2013 First look: the new deacons of Baltimore
Browse Our Archives
get the latest from
Catholic
Sign up for our newsletter
POPULAR AT PATHEOS Catholic
1