Gay Marriage and Other Churches

We know where the Catholic Church stands on the issue of gay marriage.  But how about other faiths? Jaweed Kaleem at Huffington Post has an interesting wrap-up, in light of Wednesday’s SCOTUS decisions:

Most of the nation’s biggest religious groups, such as the Roman Catholic Church (68 million members), Southern Baptist Convention (16 million), United Methodist Church (8 million) and the Church of Jesus Christ of Latter-day Saints (6 million) do not perform same-sex marriages, and have drafted resolutions or official church policies defining marriage as between a man and a woman. 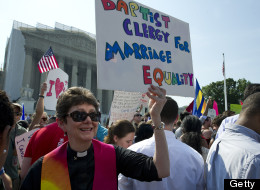 Yet, while surveys have shown that people who are against gay marriage most frequently point to religious views to explain their objections, the number of denominations that perform same-sex marriage and blessing ceremonies is growing.

…The 1.9-million member Episcopal Church voted last year to start blessing same-sex unions, even though individual priests have been performing same-sex ceremonies for several years. The blessings do not religiously count as marriage, which the church defines as being between opposite sexes. But in places where same-sex marriage is legal, priests can officiate at secular marriage ceremonies. Episcopal bishops are also not required to allow same-sex blessing ceremonies in their dioceses. The Milwaukee Episcopal bishop, for example, said this month that he won’t allow same-sex blessings in his diocese.

Similar to the Episcopal church, the Presbyterian Church (USA) does not include same-sex couples in its laws on marriage, but allows ministers to bless same-sex unions. In 2004, after Massachusetts legalized gay marriage but before the push for same-sex marriage legalization picked up steam nationally, the church voted to support state efforts to legalize civil unions. Last July, the church’s governing body voted down a proposal to change its definition of marriage to describe a union between “two people” instead of genders.

Positions also range among Muslims, Hindus and Buddhists. Most mosques do not allow same-sex marriages, and a high-ranking cleric at Egypt’s Al-Azhar University, one of Islam’s most respected schools, recently declared gay marriage to be against the faith.

June 26, 2013
What Did Obama Really Say Today About Churches and Gay Marriage?
Next Post

June 27, 2013 Will Churches Be Sued Over Gay Marriage?
Browse Our Archives
Related posts from The Deacon's Bench

500 Days of Paralyzing Anxiety
It’s not giving much away to say that 500 Days of Summer...
view all Catholic blogs