Will Churches Be Sued Over Gay Marriage? 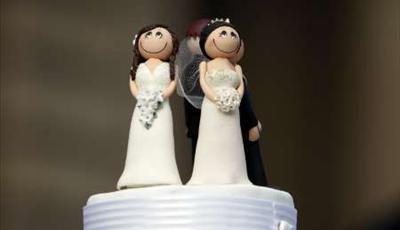 A church group that owns beachfront property discriminated against a lesbian couple by not allowing them to rent the locale for their civil union ceremony, a New Jersey department ruled Monday in a case that has become a flash point in the nation’s gay rights battle.

The New Jersey Division on Civil Rights said its investigation found that the refusal of the Ocean Grove Camp Meeting Association to rent the oceanfront spot to the couple for their same-sex union in March 2007 violated the public accommodation provisions of the state’s Law Against Discrimination.

While the ruling is decisively in favor of the couple, Harriet Bernstein and Luisa Paster, it does not end the case. An administrative law judge still must decide on a remedy for the parties.

“What this case has always been about from my clients’ perspective has been equality,” said Larry Lustberg, the lawyer for the couple. He said they will seek an order that requires the pavilion to be “open to all on an equal basis.”

Brian Raum, a lawyer for the Alliance Defense Fund, a Scottsdale, Ariz.-based group that represents the Methodist organization, Camp Meeting Association, said his clients would keep pushing back against being forced to allow civil unions on the property.

“Our position is the same,” he said. “A Christian organization has a constitutional right to use their facilities in a way that is consistent with their beliefs.”

Meanwhile, the parties in the dispute are awaiting a ruling from the 3rd U.S. Circuit Court of Appeals on whether the issue should be decided in the division on civil rights or in federal courts. A lower federal court has ruled that the state could consider the case.

A New Jersey judge ruled against a Christian retreat house that refused to allow a same-sex civil union ceremony to be conducted on its premises, ruling the Constitution allows “some intrusion into religious freedom to balance other important societal goals.”

On Thursday, administrative judge Solomon A. Metzger ruled that religious liberty did not exempt the seaside retreat, which is associated with the United Methodist Church, from renting its facilities out for purposes that violate its moral beliefs.

In March 2007, Ocean Grove Camp Meeting Association declined Harriet Bernstein and Luisa Paster’s request to rent its Boardwalk Pavilion for the ceremony. The couple sued, claiming they had been discriminated against on the basis of their sexual orientation. In December 2008, the state Division on Civil Rights found the Christian campground had likely violated the state Law Against Discrimination (LAD) and joined the case.

But Judge Metzger said church doctrine was irrelevant. “As to ‘free exercise’ [of religion], the LAD is a neutral law of general application designed to uncover and eradicate discrimination; it is not focused on or hostile to religion,” he wrote. The free exercise clause did not factor into his ruling, he stated, but “a much lower standard that tolerates some intrusion into religious freedom to balance other important societal goals.” He believed the “arm’s-length nature of the transactions” gave Ocean Grove “comfortable distance from notions incompatible with its own beliefs.”

“He said this isn’t a case of religious liberty, which is simply not true,” Jim Campbell, who represented the resort and serves as litigation staff counsel with the Alliance Defense Fund (ADF), told LifeSiteNews.com. “What this case involves at its core is the rights of a religious group to use its property in a way that is consistent with its religious beliefs.”

Campbell said most people will find Metzger’s belief that the state can force a religious facility to violate its conscience “a very scary concept. If that is a principle of the law, then essentially the government can cast aside religion if it deems something more important.” Campbell called Metzger’s ruling “an error of Constitutional law.”

UPDATE: A reader notes a distinction that he feels should be made:

The Ocean Grove Camp Meeting Association is not a church.  Granted, they have some affiliation with the United Methodist Church, however the controversy was the result of the non-church status of the OGCMA.  That organization, because it is not a church, applied for a “Green Acres” tax exemption via the New Jersey Department of Environmental Protection. The tax exemption required that the OCGMA allow use of its facilities to the public “on an equal basis.”

Because the OGCMA allowed the public to use the pavilion for weddings, and because the  OGCMA voluntarily agreed to make its facilities open to the public “on an equal basis” in exchange for a tax break,  the court ruled that the OCGMA could not exclude same-sex weddings from its pavilion.

Nonetheless: to my way of thinking, the central conflict here between a church’s values and a court’s ruling that those values are irrelevant seems one worth noting, along with the judge’s comments that “some intrusion into religious freedom [may be needed] to balance other important societal goals.”

June 27, 2013 Cardinal Pell: "The Pope does not want the Vatican to be seen as a Renaissance court"
Browse Our Archives
Related posts from The Deacon's Bench