The Women Deacons of the Armenian Church 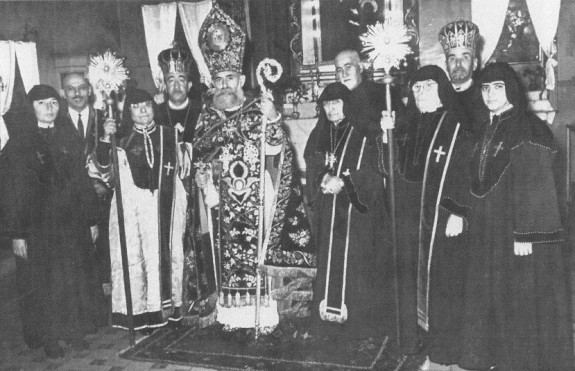 Hours after this story broke, about the head of the CDF’s remarks on women deacons, the item below popped up in my Google newsfeed. I think it opens a window to a part of the Christian world many of us in the Latin church don’t know about.

The story recounts a talk given last month in Illinois by the historian Knarik O. Meneshian, who gave some of the background behind women deacons in the Armenian Apostolic Church:

“Women deacons, an ordained ministry, have served the Armenian Church for centuries. In the Haykazian Dictionary, based on evidence from the 5th-century Armenian translations, the word deaconess is defined as a ‘female worshipper or virgin servant active in the church and superior or head of a nunnery.’ Other pertinent references to women deacons in the Armenian Church are included in the ‘Mashdots Matenadarn collection of manuscripts from the period between the fall of the Cilician kingdom (1375) and the end of the 16th century, which contain the ordination rite for women deacons.’

“The diaconate is one of the major orders in the Armenian Church. The word deacon means to serve ‘with humility’ and to assist. The Armenian deaconesses historically have been called sargavak or deacon. They were also referred to as deaconess sister or deaconess nun. The other major orders of the church are bishop and priest. The deaconesses, like the bishops and monks, are celibate. Their convents are usually described as anabad, meaning, in this case, not a ‘desert’ as the word implies, but rather ‘an isolated location where monastics live away from populated areas.’ Anabads differ from monasteries in their totally secluded life style. In convents and monasteries, Armenian women have served as nuns, scribes, subdeacons, deacons, and archdeacons (‘first among equals’), as a result not only giving of themselves, but enriching and contributing much to our nation and church. In the 17th century, for example, the scribe and deaconess known as Hustianeh had written ‘a devotional collection of prayers and lives of the fathers, and a manuscript titled Book of Hours, dated 1653.’

…To appreciate more fully the role of the deaconess in the church, Father Abel Oghlukian’s book, The Deaconess In The Armenian Church, refers to Fr. Hagop Tashian’s bookVardapetutiun Arakelots… (Teachings of the Apostles…), Vienna, 1896, and Kanonagirk Hayots(Book of Canons) edited by V. Hakobyan, Yerevan, 1964, in which a most striking thought is expressed:

If the bishop represents God the Father and the priest Christ, then the deaconess, by her calling, symbolizes the presence of the Holy Spirit, in consequence of which one should accord her fitting respect.

“Over the centuries, in some instances, the mission of the Armenian deaconesses was educating, caring for orphans and the elderly, assisting the indigent, comforting the bereaved, and addressing women’s issues. They served in convents and cathedrals, and the general population…

“Mkhitar Gosh (l130-1213), who was a priest, public figure, scholar, thinker, and writer, ‘defended the practice of ordaining women to the diaconate,’ Ervine writes, and she adds that in his law book titled, On Clerical Orders and the Royal Family, Gosh  described women deacons and their specific usefulness in the following words:

There are also women ordained as deacons, called deaconesses for the sake of preaching to women and reading the Gospel. This makes it unnecessary for a man to enter the convent or for a nun to leave it.

When priests perform baptism on mature women, the deaconesses approach the font to wash the women with the water of atonement behind the curtain.

Their vestments are exactly like those of nuns or sisters, except that on their forehead they have a cross; their stole hangs from over the right shoulder.

Do not consider this new and unprecedented as we learn it from the tradition of the holy apostles: For Paul says, ‘I entrust to you our sister Phoebe, who is a deacon of the church.’

July 5, 2013
Meet the Muslims Keeping the Peace at Christianity's Holiest Site
Next Post

July 6, 2013 Homily for July 7, 2013: 14th Sunday in Ordinary Time
Browse Our Archives
get the latest from
Catholic
Sign up for our newsletter
POPULAR AT PATHEOS Catholic
1