From the Twin Cities Pioneer Press:

Since taking over University of St. Thomas this summer, President Julie Sullivan has heard from gay faculty and students that they feel a need to “hide” on campus.

In her recent convocation address, the first lay, female president at the Roman Catholic school in St. Paul vowed to change that. 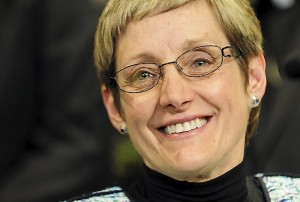 Drawing on comments this summer by Pope Francis, her message drew lengthy applause in the room — and some criticism on a Catholic education advocacy group’s site. It came shortly after two much-publicized departures of gay employees from Totino-Grace High School, the Catholic school in Fridley.

Catholic schools and campuses are grappling with the question of inclusiveness for gay employees and students amid sweeping changes. Minnesota this year joined a growing number of states that allow gays to marry amid a generational shift in attitudes: According to the Pew Research Center, 55 percent of Catholics support gay marriage today, compared with 38 percent in 2001.

And since Sullivan’s remarks, the pope has revisited the subject of homosexuality, arguing the church has been too preoccupied with gay marriage.

A push for a more inclusive environment on Catholic campuses has continued amid media reports about gay Catholic school employees losing their jobs. Observers with divergent takes on Catholic teachings agree: At stake is a profound tension between traditional church doctrine on homosexuality and the fundamental Catholic belief in accepting all human beings.

Danielle Tschida, a junior at St. Thomas, said faculty and students were talking about Sullivan’s convocation remarks in the days after her first public address. Tschida, the president of UST Allies, a campus group that supports gay students, heard about the speech from a sociology professor.

“Great, we have another ally,” she thought.

“It was a pretty pointed statement,” he said of Sullivan’s message. “It’s no secret that St. Thomas has climate issues for gay students and staff. She took that head-on.”

September 29, 2013 Catholic seminary enrollment highest in two decades
Browse Our Archives
get the latest from
Catholic
Sign up for our newsletter
POPULAR AT PATHEOS Catholic
1