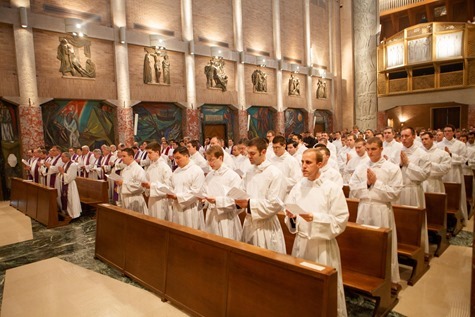 After decades of glum trends—fewer priests, fewer parishes—the Catholic Church in the United States has a new statistic to cheer: More men are now enrolled in graduate-level seminaries, the main pipeline to the priesthood, than in nearly two decades.

This year’s tally of 3,694 graduate theology students represents a 16 percent increase since 1995 and a 10 percent jump since 2005, according to Georgetown University’s Center for Applied Research in the Apostolate (CARA).

Seminary directors cite more encouragement from bishops and parishes, the draw of Pope Emeritus Benedict XVI and the social-justice-minded Pope Francis, and a growing sense that the church is past the corrosive impact of the sexual abuse crisis that exploded in 2002.

Ultimately, it was “a calling in my heart,” says Kevin Fox.

He walked away from his electrical engineering degree and a job in his field, working with CT scanners, to enter St. Mary Seminary in Wickliffe, Ohio, in his home diocese, Cleveland, this fall.

“I always had an inkling that I might want to be a priest and my parish priest told me he thought I might be called,” said Fox, 24. “But I put it aside.”

With a fresh degree from Case Western Reserve and his first post-graduation job, Fox soon realized the secular path “wasn’t filling my soul with joy.”

Now, after years of pure science, Fox is immersed in pure theology–and loving it. The challenges of the culture, such as crude jokes from strangers about the abuse crisis, have not dissuaded him.

“I feel the church has done a great deal to deal with (preventing) abuse and the seminary took a lot of care in screening and training us to make sure we are the good guys,” Fox said.

Fox is one of 72 students currently enrolled in the undergraduate and graduate programs at St. Mary, the highest number in decades, said the Rev. Mark Latcovich, president and rector.

Latcovich credits encouraging current seminarians and priests who are “our best recruiters. If they are happy and witnessing their faith and opening their hearts, that enthusiasm and joy is contagious.”

September 29, 2013 Worth a thousand words: taking communion to the sick
Browse Our Archives
get the latest from
Catholic
Sign up for our newsletter
POPULAR AT PATHEOS Catholic
1