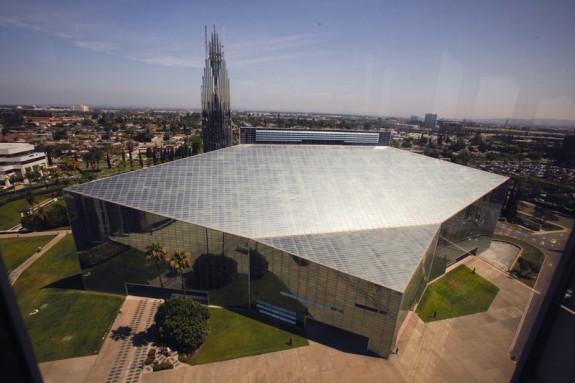 A fascinating piece on what’s involved in the transformation, from the Los Angeles Times:

The name has already been changed to the Christ Cathedral. But the work of liturgical consultants, priests and architects to transform a temple so closely identified as a symbol of Schuller’s sunny, uniquely Southern Californian theology into one that conforms to the traditions of the Roman Catholic Church has just begun.

“The exterior will always be the Crystal Cathedral, at least for a while,” said Duncan Stroik, a professor of architecture at Notre Dame and editor of the publication Sacred Architecture Journal. “Catholic on the inside, but kind of Protestant on the outside.”

Those who have taken on the project recognize that their assignment is a intimidating one, but they also have faith:

They can turn the Crystal Cathedral into the Christ Cathedral…

…Influential architect Philip Johnson designed the star-shaped structure that stood 128 feet tall, 415 feet long and 207 feet wide, with more than 10,000 glass panels attached to a latticework of white steel trusses using a silicone glue. The chancel, a 185-foot-wide span of marble quarried in Spain, could hold more than 1,000 singers and musicians.

“It’s probably the first megachurch turned into a Catholic place,” Stroik said. “It’s an interesting shape, it’s glass, it’s not cruciform. All those things would not be traditional, or typical, of a Catholic Cathedral.”

A cathedral, at least in the Catholic standard, tends to evoke a mental image of a gilded Roman basilica. Woeger is quick to correct that: A cathedral — named for the cathedra, the bishop’s chair — can be gothic, it can be Byzantine, it can be as modern as the Crystal Cathedral.

The overarching requirement, Stroik said, is that Catholics believe the cathedral is God’s house; as such, the structure should reflect that: “It should be beautiful, it should be worthy.”

The obstacles are in the details. They’ll have to install a traditional altar, a gospel lectern called an ambo and baptismal font into a structure that was built as a television studio as much as a sanctuary. They’ll also have to add prominent images of such figures as the Virgin Mary, the apostles and, especially, the church’s namesake.

One point of concern, Stroik said, are the church’s three balconies, which hold thousands of people.

He said they allow for a much larger congregation but fall outside the tradition of the Catholic Church, detracting from the notion that it is “one body in Christ” who have gathered. Other scholars agreed, but Woeger countered that the balconies could also be seen as bringing more people closer to the fore.

Stroik noted that within the fraternity of architects there would be a more earthly worry: “You don’t want to be the guy that gets credited with destroying Philip Johnson’s building.” 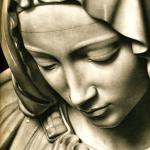 September 14, 2013
At the cross, her station keeping: reflections on the Queen of Martyrs
Next Post

September 14, 2013 "There is a growing tendency to 'tabloidism' in the Catholic press...and the worrying phenomenon of blogs"
Browse Our Archives
get the latest from
Catholic
Sign up for our newsletter
POPULAR AT PATHEOS Catholic
1