A young priest responds to charges of clericalism 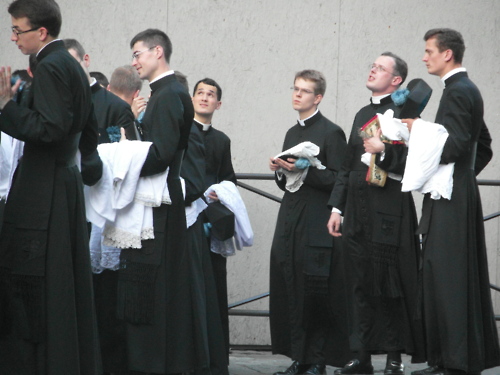 Most people are quick to remind me of how young a friar and priest I still am. That statement of fact is often, but not always, accompanied by some well-meaning remark by a parishioner after Mass or an audience member after a talk suggesting that I’m not like other “young priests” they know. What generally follows that sort of comment is an expression of concern about the perceived unapproachable or pretentious character of so many of the newly ordained. They appear to be more concerned about titles, clerical attire, fancy vestments, distance between themselves and their parishioners, and they focus more on what makes them distinctive than on their vocation to wash the feet of others (Jn 13:14–17), to lead with humility and to show the compassionate face of God to all. What concerns people, in other words, is clericalism.

First, I find it important to be called Father Duffy (as an aside: I go by my last name because I have been called “Duffy” since the 4th grade.  The only people that call me “Michael” are my family).  I also think vestments and the liturgy ought to be beautiful.  I don’t think that makes me clerical in the least.  The title “Father” is, I hope, a title of affection, not of authority.  I wear my cassock almost daily in my parish.  It helps to remind me of what I’m called to and it helps the people of the parish know to whom I belong.  That doesn’t create a separation between me and the parishioners of the parish.  I wear my collar when I go to the bank and when I go food shopping.  I have gotten into many conversations this way with people that I wouldn’t have otherwise – simply because I dressed as a priest.  Even Pope Francis, when he was Cardinal Bergoglio, riding the buses and enjoying a matte with the people of the nabe, was wearing his collar. Jesuits will tell you that truth IS humility and Bergoglio, in his collar was saying, “this is who I am, a Catholic priest, very much here and one of you, but a visible reminder that God is always with us all.”

The collar makes me stand out.  And thats the point.

He has several other good points to make. Read the rest.

October 11, 2013 JFK's rosary goes up for auction
Browse Our Archives
Related posts from The Deacon's Bench