Good luck trying to preach this idea at Midnight Mass 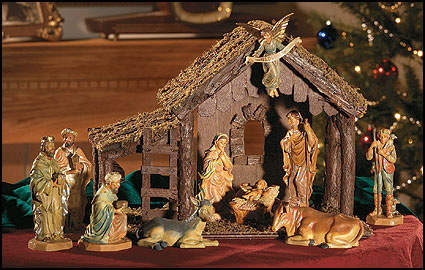 A biblical scholar makes the compelling argument that Jesus was not born in a stable:

This understanding of the story has been around, even in Western scholarship, for a long, long time. Bailey cites William Thomson, a Presbyterian missionary to Lebanon, Syria and Palestine, who wrote in 1857:

It is my impression that the birth actually took place in an ordinary house of some common peasant, and that the baby was laid in one of the mangers, such as are still found in the dwellings of farmers in this region.

And Bailey notes that Alfred Plummer, in his influential ICC commentary, originally published in the late nineteenth century, agreed with this. So why has the wrong, traditional interpretation persisted for so long?

I think there are two main causes. In the first place, we find it very difficult to read the story in its own cultural terms, and constantly impose our own assumptions about life. Where do you keep animals? Well, if you live in the West, away from the family of course! So that is where Jesus must have been. Secondly, it is easy to underestimate how powerful a hold tradition has on our reading of Scripture. Dick France explores this issue alongside other aspects of preaching on the infancy narratives in in his excellent chapter in We Proclaim the Word of Life. He relates his own experience of the effect of this:

[T]o advocate this understanding is to pull the rug from under not only many familiar carols (‘a lowly cattle shed’; ‘a draughty stable with an open door’) but also a favourite theme of Christmas preachers: the ostracism of the Son of God from human society, Jesus the refugee. This is subversive stuff. When I first started advocating Bailey’s interpretation, it was picked up by a Sunday newspaper and then reported in various radio programmes as a typical example of theological wrecking, on a par with that then notorious debunking of the actuality of the resurrection by the Bishop of Durham!

So is it worth challenging people’s assumptions? Yes, it is, if you think that what people need to hear is the actual story of Scripture, rather than the tradition of a children’s play. France continues:

The problem with the stable is that it distances Jesus from the rest of us. It puts even his birth in a unique setting, in some ways as remote from life as if he had been born in Caesar’s Palace. that’s the message of the incarnation is that Jesus is one of us. He came to be what we are, and it fits well with that theology that his birth in fact took place in a normal, crowded, warm, welcoming Palestinian home, just like many another Jewish boy of his time.

There’s much more historical digging behind all this, drawing on the original Greek and what we know of first century Palestine.  Read the rest.

To my way of thinking, the physical setting of the incarnation is incidental; the address is beside the point. The reality of it is all that matters.

As noted above: “The message…is that Jesus is one of us.  He came to be what we are.”

October 29, 2013
"The new head of the Roman Catholic Church is blowing everyone's minds."
Next Post

October 29, 2013 Catholics acquitted of disorderly conduct following NY protest
Browse Our Archives
get the latest from
Catholic
Sign up for our newsletter
POPULAR AT PATHEOS Catholic
1