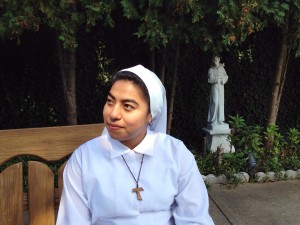 A beautifully rendered story of survival and faith, from CNS and videographer Tyler Orsburn.  Take a look.  Keep this young woman in your prayers!

The Dialog in Wilmington published this profile of the postulant:

Up until a few weeks ago, Iliana Maldonado was a typical 20-something in the United States.

She had a steady job and income. On her days off, she went out with friends her age, regularly posting and commenting on Facebook from a Samsung Galaxy smartphone that she rarely left behind.

But there was something more attractive to her than the smartphone and her group of friends. A man had entered her life. That man was St. Francis of Assisi.

These days, the 21-year-old is experimenting living in a community of cloistered nuns in a Wilmington, Del., convent, embracing the life of poverty, service and community that St. Francis and his followers, including St. Clare, began in the 12th century.

If all goes as planned, she will one day be a religious sister like the rest. Her life now means no money, no cellphone, no car, no night out with her friends — only a series of prayers, manual labor, and instruction about the Franciscan way of life as a postulant with the Poor Clare sisters at the Monastery of St. Veronica Giuliani.

Faith, Freedom, and Grace
"Grace does not destroy nature but perfects it." - Thomas Aquinas. The...
view all Catholic blogs
Copyright 2008-2021, Patheos. All rights reserved.