Whatever happened to the real child in “The Exorcist” case?

Whatever happened to the real child in “The Exorcist” case? October 9, 2013 Deacon Greg Kandra 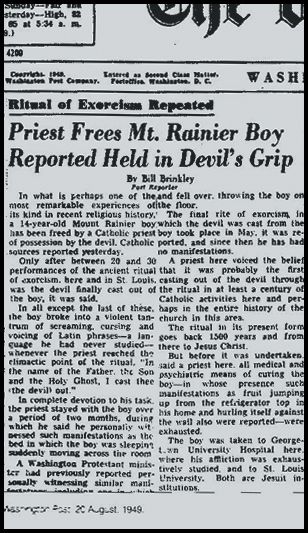 Well, this explains a lot: evidently someone once possessed by the devil grew up to work for the U.S. government.

This little news nugget comes to us just in time for Halloween, as Hollywood releases a new DVD of the classic film to mark its 40th anniversary (!).

The Daily Mail goes back to the original story which made front-page news in The Washington Post in 1949 and served as the inspiration for William Peter Blatty’s blockbuster novel:

With its disturbing focus on the demonic possession of a 12-year-old girl, horror movie “The Exorcist” has terrified audiences around the world ever since it hit the big screen in 1973.

Yet few realise that the film – and William Peter Blatty’s novel of the same name – were inspired by the true story of a months-long exorcism of a 14-year-old boy by Jesuit priests in Missouri in 1949.

The teenager, who was given the pseudonym Roland Doe to protect his identity, was born into a German Lutheran Christian family and initially lived with his parents in Prince George’s County, Maryland.

As an only child, Roland was dependent on adults for company, in particular his Aunt Harriet, who was a spiritualist and introduced him to the Ouija board.

The boy’s parents began to notice strange occurrences such as his bed shaking, furniture moving across the room and scratching noises coming from inside the walls.

Soon after this, when he was 13 years old, Roland’s aunt died.

His parents had him evaluated for several days at Georgetown University Hospital, where doctors released him with a clean bill of health.

Afterwards, they met with Father Albert Hughes, the Roman Catholic priest at Saint James Parish, near their Maryland home.

Father Hughes said he believed the boy was possessed and sought permission from the Archbishop of Washington DC to begin the rite of exorcism.

Roland’s parents relocated him to a relative’s home in Saint Louis, Missouri, where over the course of several weeks as many as nine Jesuit priests, including Father Bowdern participated in the boy’s exorcism.

Another of them, Father Raymond Bishop, kept a diary of those encounters, where much of the information surrounding Roland’s alleged possession has been sourced…

…After his exorcism, according to Father Bishop’s diary, the boy became ‘a fine young man.’

Roland apparently married, raised children and maintained a long and productive career with the US government before retiring, reportedly to suburban Maryland. He has never spoken publicly about the case.

October 9, 2013
Pope Francis on what it means to be "catholic"
Next Post

October 9, 2013 Quote of the day: "It's because I fell in love with Jesus"
Browse Our Archives
get the latest from
Catholic
Sign up for our newsletter
POPULAR AT PATHEOS Catholic
1