From the National Catholic Reporter:

If anyone wants an example of what the emphasis on mercy under Pope Francis looks like in action, they’ll find one this afternoon in Rome at the Church of the Gesù, the mother church of the pope’s Jesuit order, where a funeral will be celebrated for a Colombian transgendered and homeless person beaten to death five months ago. 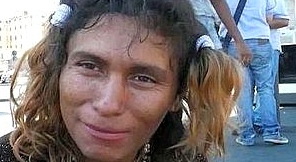 The body of Andrea Quintero, who struggled with drug addiction and lived on the streets in the area around Rome’s main Termini train station, was found alongside a track in the station on July 29. An investigation concluded he died as a result of injuries from a severe beating.

Quintero, 28 at the time, had left his family in Colombia four years before. He was well known to personnel at the station and to charity workers, calling himself the “Trans of Termini.”

A week before his death, he gave a brief video interview to the Italian paper Corriere della Sera in which he described having a paralyzed arm and walking with a limp as a result of a previous beating.

In the interview, Quintero said his dream was to “meet a guy with money who’ll get me out of this ugly life,” referring to drugs and homelessness. To date, police have not arrested anyone for Quintero’s murder.

The delay in organizing a funeral, according to news reports, was due to the fact that Quintero’s family never made a request for his remains or provided any instructions about how they wanted him memorialized.

Eventually the Jesuit-run Centro Astalli, dedicated to aiding refugees, in combination with the local branch of Caritas and civic officials, stepped in to organize a funeral service…

…Jesuit Fr. Giovanni La Manna, director of the Centro Astalli, said the funeral is intended not only to mourn Quintero’s death, but to offer “a signal for the entire Roman community that’s distracted in the face so many people who face discrimination, and who live their difficulties to the indifference of our city.”

UPDATE: I got the following e-mail this morning:

As an occasional reader of your blog, “The Deacon’s Bench,” I was pleased you posted John Allen’s story on Andrea Quintero’s funeral.

In your headline for the post, you referred to Andrea as a “transgendered man.” I’d request that you use kinder language when discussing trans individuals in the future by using the term “transgender” instead and respecting their preferred gender identity. Andrea identified as a woman and so it would be more respectful to use the term “transgender woman” in your headline. I plan to reach out to John Allen about the fact feminine pronouns should have been used in the story as well.

I work with the LGBT Catholic community in ministry and know how important language can be in creating a sense of respect and welcome. I appreciate any efforts you can make in the future to make trans people feel God’s love through your blogging by using inclusive language.

My view: Andrea may have lived as a woman, but he died as a man. I suspect his death certificate, like his birth certificate, said “male.” Referring to him as a her may have had the effect of being more respectful of his feelings, but it would have been factually incorrect.

December 27, 2013 Must-see video: man asks homeless what they want for Christmas—and then gives it to them
Browse Our Archives
get the latest from
Catholic
Sign up for our newsletter
POPULAR AT PATHEOS Catholic
1

It Begins With Wine at a Wedding
A reading from the Holy Gospel according to John: There was a...
view all Catholic blogs
Copyright 2008-2021, Patheos. All rights reserved.