Theology of the Dead Body: “‘The Walking Dead’ is fully Catholic” 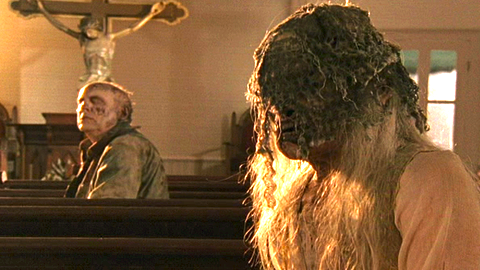 There are two key moments that clinched it for me in “The Walking Dead.”

A couple of years ago, Sheriff Rick, hunting for any signs of life in the world of the zombie apocalypse, stumbled on a plain wooden church, in the middle of nowhere. When he stepped inside, he discovered the congregation was made up of zombies, sitting in the pews, staring silently at Jesus on the cross.

Even zombies go to church. Who knew?

Not long after, the sage-like Hershel remarked, with a squint and a drawl and a nod to his abiding faith:  “I can’t profess to understand God’s plan. Christ promised the resurrection of the dead. I just thought he had something a little different in mind.”

Welcome to The Theology of the Dead Body.

“The Walking Dead” has been a guilty pleasure of mine since its debut four years ago, and now Katrina Fernandez says what a lot of us have been thinking: this show is Catholic to the core.  Check this out:

I’d go further and suggest that the show is a haunting, challenging metaphor for our broken world—a world in which any of us could be The Walking Dead and, by the grace of God, we aren’t.

People have wondered about the proliferation of zombie fiction. I don’t wonder at all.  I think it connects in a profound and unsettling way to our culture—a world in which abnormality is masked as normal, in which death mimics life, and wherein anyone at any time might be a victim of a tragedy no one can explain.   After Columbine, after 9/11, after Newtown, this is our world.  The soul-less terrorize the soulful, and evil strikes out against good for no discernible reason.  They seem like us, they walk like us, but they are dead.  And they are devouring us.

A recurring question on the minds of many viewers of “The Walking Dead” is “why?”  Why did the zombie apocalypse happen?  What caused it?

The creators say that’s beside the point. They may never tell us, and we may never know.  It is rooted in something beyond explanation. As the CDC scientist whispered in Rick’s ear at the end of Season 1: “We’re all infected.”

We all have it. “It”—original sin, or a lethal virus, or some unexplained quirk of nature —dwells in us all.  How do we deal with that?  With despair, or with hope?  With faith, or with fear?

Perhaps that’s what makes the difference between living in the light—or walking as one of the dead.

December 4, 2013
Where the Extraordinary Form isn't so extraordinary: South Carolina
Next Post

December 4, 2013 Obama quotes the pope in economic address
Browse Our Archives
get the latest from
Catholic
Sign up for our newsletter
POPULAR AT PATHEOS Catholic
1

Things Keeping Us Going: Circle of Life Edition
There are so many things happening in the world right now...
view all Catholic blogs
Copyright 2008-2021, Patheos. All rights reserved.