O’Malley and the minister: a shot that shocked—UPDATED

O’Malley and the minister: a shot that shocked—UPDATED January 18, 2014 Deacon Greg Kandra 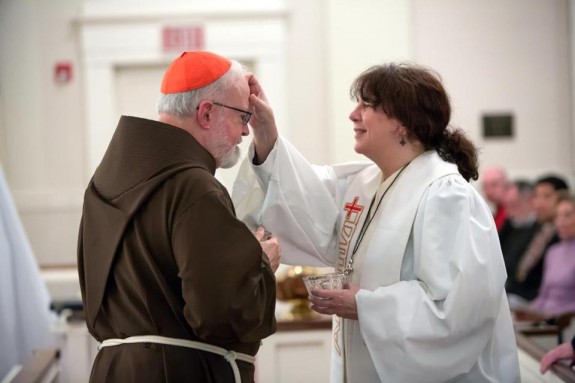 This picture has been around the world a few times now—and it’s continuing to spark debate.  It shows the moment at an ecumenical service last Sunday when Boston’s Cardinal Sean O’Malley asked Methodist minister Anne Robertson to make the sign of the cross on his forehead with holy water as a remembrance of baptism.

Here’s The Boston Globe this morning:

“What a disgrace to our Holy Mother Church,” wrote one commenter. “Is there no limit to this man’s heresies?”

An orthodox Catholic blog called O’Malley’s gesture a “blatant, manifestly public repudiation of the sanctity of Holy Orders of the Catholic Church.”

“O’Malley was showing that he believes that the prohibition of women’s ordination does not entail any disrespect for women,” he wrote.

Some liberal Christians are praising O’Malley, suggesting his gesture might be another indication that under Pope Francis the church may be opening up.

Others, including some friends of Robertson, who posted about the moment on a blog and on Facebook, feared that O’Malley might be getting too much credit.

“I respect Anne immensely as a person, and if it was really powerful and meaningful to her, I don’t want to take that away from her or from anybody else,” said the Rev. Tom Getchell-Lacey, pastor of the First United Methodist Church of Gilford, N.H., and a friend of Robertson’s.

But, in an interview, he compared the positive reception to O’Malley’s gesture to the great press Francis has been getting: “People are congratulating him for being just a decent human being.”

…The archdiocese, which declined to make O’Malley available for an interview, downplayed the significance of the moment and said this United Methodist ritual did not violate Catholic teaching.

“It is not a blessing or a sacrament,” archdiocesan spokesman Terrence C. Donilon said in an e-mail. “It is a recalling of the grace of Baptism. Catholics do it every time they enter a church, by dipping their finger into the holy water font and making the sign of the cross.”

I think the archdiocese makes a good point. It wasn’t a sacrament. It was a gesture—and a reminder that   the Catholic Church recognizes as valid all Christian baptisms that use the Trinitarian formula—including Methodists.

(While we’re on the subject: It’s worth remembering, too, that the grace of baptism does not depend on the worthiness of the minister or even on Holy Orders. A lay person can baptize. Even an atheist, in case of necessity, can do it.)

But again: this wasn’t a sacrament, or  even a re-enactment of the sacrament. From the wording used, it’s clear it wasn’t even a blessing. In word and action, in fact, it was strikingly similar to what the minister says and does when conferring ashes on Ash Wednesday. (Something, of course, that can be done by anyone, to anyone.) Here, the matter used was blessed water, not blessed ashes. And it was evidently intended to serve as a quiet echo of the grace all Christians share by virtue of baptism.

But I guess the echo was a lot louder than people expected.

One final footnote. This reminded me of something Francis did in his first moments as Pope.  When he appeared on the balcony at St. Peter’s, he paused for a moment to ask the people—all people—to pray over him before he offered them his blessing.  “Let us make, in silence, this prayer,” Pope Francis said, “your prayer over me.” And he bowed his head before the people and before God.

It was a beautiful, stirring act of humility—a foreshadowing of many other gestures like it to come.

I don’t recall anyone that night saying the pope was committing heresy or repudiating his Holy Orders.

Donilon denies the Protestant minister’s action was a “blessing” but then says it was like Catholics “making the sign of the cross”—which is a blessing!

Blessings are sacramentals. Perhaps the most common Christian sacramental is the Sign of the Cross, augmented or not by the use of Holy Water, and performed by millions of Catholics every day. No canon or liturgical law prohibits baptized non-Catholics from making the Sign of the Cross nor from using Holy Water in accord with its character. Thus, one Christian making the Sign of the Cross on another Christian’s forehead (in explicit commemoration of one’s baptism or not) is simply something to be explained to those not used to seeing it performed by a female Protestant minister on a Catholic cardinal—it is not something whose character should be denied by a Church spokesman, only to be admitted by an analogy that was intended to distinguish the two acts! That is to pile confusion on top of confusion.

Donilon is right in saying it was not a blessing, and should have left it at that instead of straining for an inaccurate comparison.

January 18, 2014 Vatican confirms Medjugorje commission has completed investigation
Browse Our Archives
get the latest from
Catholic
Sign up for our newsletter
POPULAR AT PATHEOS Catholic
1