A parish priest offers his perspective, from NCR:

The thornier annulments involve people who were not Catholics at the time and had absolutely no reason to get married in a Catholic church. Ironically, they have to go through a full legal process before a church tribunal. 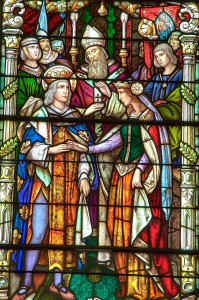 It is painful and pointless. They have to find witnesses, get records, take statements, dig up old contacts, and open old wounds. All of our language is legal, not pastoral. We speak of petitions, tribunals, witnesses, advocates, petitioners, defendants and evidence. It is Kafkaesque. It turns pastors into bureaucrats, to no purpose.

Sometimes there are good reasons why people don’t want to get in touch with the former spouse. There may have been abuse or violence. They open themselves up to further wounds or retribution. They may not even know where the former spouse or witness is after so many years. I have had cases in which former spouses held up an annulment out of spite for years.

The Roman Catholic annulment process needs a total overhaul. We should look to the Orthodox churches for a better way to handle it.

In the Eastern churches, the first annulment is handled entirely by the parish priest. After all, he is the person on the scene. He knows the people involved and can judge their sincerity and seriousness. He can talk to them about marriage and see if they are sincere in their desire for reconciliation with the church. No tribunal downtown at the chancery office can do that.

Basically, in the Orthodox churches, couples get a second chance. Their first marriage can be annulled by the parish priest in a simple conversation and confession. But third or fourth marriages would need the permission of the bishop in most Orthodox churches, as I understand it. However, this is a pastoral process, not a legal one.

Our legal process of annulments is a holdover from the days when the Catholic church was the civil law of marriage in many countries. Today, it makes no sense.

Over the years, I have had several couples get infuriated with me or with the church and just walk away in anger. A friend of mine who is an Episcopal priest told me once, “So long as you guys are so strict about divorce and remarriage, there will be a reason for the Episcopal church.”

From my own experience: at least three quarters of the people I meet with about annulments never complete the process. It becomes too painful, too daunting, too time-consuming, too difficult. They begin the journey, standing at the foot of an Everest of paperwork and memories and emotions—and they just can’t finish it. The process isn’t brief, either; it can take years.

I agree: there needs to be a better way.

UPDATE: The Anchoress touched on some of this last month, you may recall:

I have never met anyone who has regretted seeking an annulment, but many divorced-and-remarried Catholics nevertheless believe they are difficult to obtain, costly, time-consuming, and personally intrusive. For some, the idea of having to re-engage with their former spouse is so painfully repellent that it seems a cruelty inconsistent with the mercies of Christ, unendurable, even for the consolation of Communion.

That last indicates a deficient understanding of the Eucharist. Coupled, perhaps, with an underwhelming experience of the mass and a poorly formed sense of Christ’s presence amid our sufferings, it all adds up to a failure of instruction and catechesis for which the Institutional Church must accept a deal of blame. If the sheep are unable to recognize the reality of the Good Shepherd made Present before them, it is up to those charged with their care and feeding to rescue them from their wanderings and correct their course, but with gentleness, acknowledging how their own negligence contributed to the scattering.

Our teachings are founded upon the words of Christ Jesus and they’re hewn through two thousand years of nuanced, lively, and inspired reasoning that has always managed to balance justice with mercy. And yet, when Catholic marriages began to fall to the sexual revolution, the Church—like the sloth-slow, unresponsive NIS—seemed to seize up; it did little to explore more fluently pastoral ways to communicate its wisdom, and even less to tell divorced Catholics that they still mattered, and still belonged.

And the other Greg at Patheos—Dr. Greg Popcak— has some thoughts, too:

In my opinion, requiring married couples to divorce before seeking an annulment sends the message that the civil authority is the one that counts, not the Church.  That’s a terrible message to send.  Second, it puts Catholics in a terrible bind.  The Church forces the couple to get a divorce before it will rule on the validity of the marriage.  What if the church then finds the marriage valid despite the divorce?  How cruel is that?  This policy puts the Church in the position of finding a reason, any reason, to grant the declaration of nullity so the couple can be spared living in limbo, and it puts other couples who honestly don’t have legitimate grounds for an annulment in the position of being civilly estranged but morally bound to their spouse.  How does this not make the Church complicit in leading people into temptation of contracting an invalid second marriage?

Instead, I propose that the Church require couples to seek a declaration of nullitybefore seeking a civil divorce–except in cases of physical abuse.  That would allow the Church to adopt a pastoral position.  The Church could counsel the couple on the reasons that it appears that the marriage is valid and make recommendations for healing it.  Or it could state that yes, this is a marriage that is definitely invalid and the couple could proceed to divorce. It would make the annulment process a process of discernment which could be more pastoral than juridical but still have integrity and weight.

Daly’s position is confusing but I think it boils down to: Divorce and remarriage is not the worst sin one can commit, and don’t make a habit of it, but, well, whatever you guys decide is fine. I for one think that would be pastorally disastrous advice to give people living in contradiction to Christ’s words on marriage. Moreover, I think that Daly’s offering such terrible advice as part of his call for reform in the annulment process only sets back the case for true reform by linking in people’s minds genuine reform with destructive approaches to marriage problems.

January 15, 2014
"Catholicism is a religion of the senses": why beautiful churches matter
Next Post

January 15, 2014 Turns out, "The Flintstones" got it right
Browse Our Archives
get the latest from
Catholic
Sign up for our newsletter
POPULAR AT PATHEOS Catholic
1

Dawkins & the Eucharist
Dawkins is a silly atheist turned into something serious by Catholic fundamentalists....
view all Catholic blogs
Copyright 2008-2021, Patheos. All rights reserved.
error: Content is protected !!