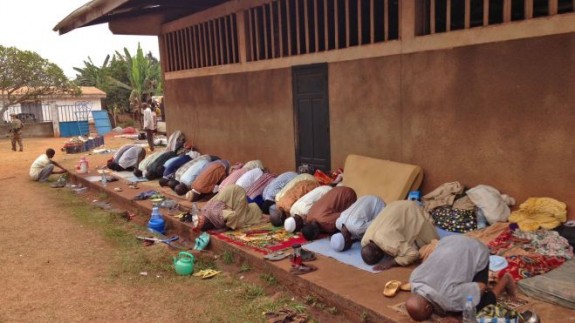 Muslims pray as they hide at a Catholic church in Carnot, a town 200 kilometers (125 miles) from the Cameroonian border in Central African Republic.  (AP Photo/Krista Larson)

Remarkable, from the AP:

The Christian militiamen know hundreds of Muslims are hiding here on the grounds of the Catholic church and now they’re giving them a final ultimatum: Leave Central African Republic within a week or face death at the hands of machete-wielding youths.

On Monday, some of the 30 Cameroonian peacekeepers fired into the air to disperse angry militia fighters congregated outside the concrete walls of the church compound. The gunfire sent traumatized children running for cover and set off a chorus of wails throughout the courtyard.

The peacekeepers are all that stand between nearly 800 Muslims and the armed gangs who want them dead. Already the fighters known as the anti-Balaka have brought 40 liters (10 gallons) of gasoline and threatened to burn the church to the ground.

Even the Rev. Justin Nary, who takes in more Muslims by the day, knows he too is a marked man in the eyes of anti-Balaka.

“Walking through town I’ve had guns pointed in my face four times,” he says. “They call my phone and say they’ll kill me once the peacekeepers are gone.”

Some of those seeking refuge fled from the village of Guen, about 100 kilometers (62 miles) away, after at least 70 Muslims were killed there, according to the Rev. Rigobert Dolongo who said he helped bury the bodies.

Muslims and Christians lived together in Carnot in relative peace for generations until a Muslim rebellion from the country’s far north overthrew the government and unleashed total chaos. The rebels known as Seleka were blamed for scores of massacres on predominantly Christian villages across the country.

When they were forced from power in January, it unleashed a wave of violent vengeance against Muslims throughout the anarchic nation. In the capital, angry mobs killed and mutilated anyone suspected of having supported the Seleka. The Christian militia known as the anti-Balaka stormed Carnot in early February when the Seleka fled.

… Marafa Abdulhamane, 73, wipes tears from his eyes when he recalls how they surrounded his home and ordered him to leave under threat of death. A native of Cameroon, he has lived in Carnot for 50 years. While some neighbors packed up his things that remained and brought them to him in a suitcase at the church compound, he’s made up his mind to try and leave.

“My shop has been looted and my home has been taken over by Christians. Where will I go?” he says. “They say they don’t want us wearing our traditional robes in town or saying ‘Allah Akbar’ anymore. It’s as though they don’t want Muslims or anything Islamic here anymore.”

Now he sits near the steps of the church with his friends, stroking his prayer beads as the Catholic priests prepare the area for Sunday Mass. There is no longer a mosque to pray at. No announcement of the call to prayer. On the grounds of the church, the men kneel on rice sacks pointed toward Mecca and whisper their prayers.

He and his friends laugh when asked if they ever thought they would live at a church. However, they recognize the gravity of the situation that now faces them.

“If it weren’t for the church and the peacekeepers, we’d all be dead,” says Mahmoud Laminou, who has been here for two weeks.

February 25, 2014
New cardinal calls for Church to turn toward the poor
Next Post

February 25, 2014 What is Pope Francis really up to?
Browse Our Archives
get the latest from
Catholic
Sign up for our newsletter
POPULAR AT PATHEOS Catholic
1