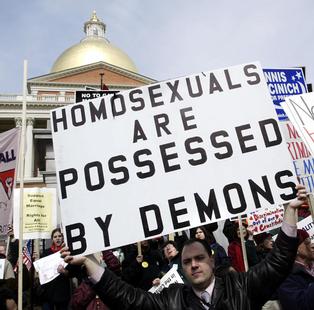 Not a lot of surprises here, but it gives a compelling snapshot of the times in which we live.

From the Public Religion Research Institute:

In the decade since Massachusetts became the first state to legalize same-sex marriage, Americans’ support for allowing gay and lesbian people to legally wed has jumped 21 percentage points, from 32 percent in 2003 to 53 percent in 2013, transforming the American religious landscape.

“While many churches and people in the pews have been moving away from their opposition to LGBT rights over the last decade, this new research provides further evidence that negative teachings on this issue have hurt churches’ ability to attract and retain young people,” said PRRI CEO Dr. Robert P. Jones. “Nearly one-third of Millennials who left their childhood religion say unfavorable church teachings about or treatment of gay and lesbian people played a significant role in their decision to head for the exit.”

A strong majority of (58 percent) Americans, including 7-in-10 (70 percent) Millennials (ages 18 to 33), agree that religious groups are alienating young people by being too judgmental about gay and lesbian issues. Notably, nearly one-third of Millennials who left their childhood religion to become unaffiliated say negative teachings about or negative treatment of gay or lesbian people were either a somewhat (17 percent) or very (14 percent) important factor in their decision to leave.

February 27, 2014 Shock: man caught on tape vandalizing LA Catholic church
Browse Our Archives
get the latest from
Catholic
Sign up for our newsletter
POPULAR AT PATHEOS Catholic
1