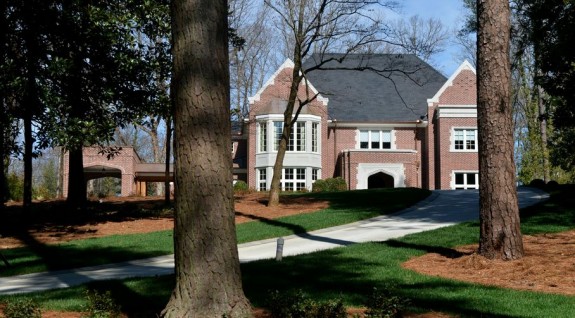 From The Atlanta Journal-Constitution:

The Cathedral of Christ the King in Buckhead hopes to begin renovations next month on a newly acquired rectory for its parish priests at a cost, including purchase of the property, of $2.2 million.

The residence once housed Archbishop Wilton Gregory, who heads the Archdiocese of Atlanta, but he recently moved into a new, 6,196-square-foot home on Habersham Road in Buckhead. The archdiocese built that home at an additional cost of $2.2 million.

The money for these expenditures came from a $15 million bequest from Joseph Mitchell, nephew “Gone With the Wind” author Margaret Mitchell. How that cash was used has touched off debate within the parish and archdiocese.

Some parishioners think Joseph Mitchell’s wealth should have been used for schools and the poor – that clergy leadership needed to follow the example of Pope Francis, who’s made international headlines with his admonitions to Catholics to live simpler, more frugal lives.

Gregory and the rector, Rev. Monsignor Frank McNamee, said the expenditures were necessary for their living arrangements. The new home, said Gregory, also allows him to “smell like the flock” – to have a place where he can more easily mingle with church members.

Others aren’t convinced. “This,” said Beth Maguire, a Christ the King parishioner, “is an excessive lifestyle.”

Unfortunately, the rest of the story is behind a pay wall.  A reader in Atlanta, however, sent me the following excerpt:

In January, Maguire and nine other parishioners at Christ the King met with Gregory and Christ the King’s rector, the Rev. Monsignor Frank McNamee. They requested that Gregory sell his new home, halt the planned renovation of his old one (and move back into it) and spend the money instead   on aiding the poor, as they believe Pope Francis would wish. They recommended a more modest renovation of the existing rectory on the grounds of Christ the King to house parish priests.

Gregory turned them down. In an interview with The Atlanta Journal-Constitution this month, Gregory and McNamee said the expenditures were necessary for their living arrangements and that it was too late to reverse course. They also noted the plans had been approved by governing bodies within their respective institutions.

“To undo what has been publicly announced for two years wouldn’t be a prudent use of archdiocese resources,” Gregory said.

Gregory also said he thinks the new home would have the pope’s blessing.

“He wants his bishops to engage with his people,” said Gregory, who was installed as archbishop in Atlanta in 2005. His new home, he said, allows for larger groups to visit; the grounds also are good for cookouts and other outdoor activities. In this way, said Gregory, he can follow the pope’s admonition to “smell like the flock” — to be close to parishioners.

“It’s important for me to connect,” he said. “And that’s another dominant theme for Pope Francis.”

March 26, 2014
“Who’s more important? The Pope or that little old lady who recites the rosary every day?”
Next Post

March 26, 2014 It's a boy: fired Montana teacher gives birth
Browse Our Archives
get the latest from
Catholic
Sign up for our newsletter
POPULAR AT PATHEOS Catholic
1

Ordinary Time Still Passes When We're Not Looking
I am an older parent.  People mistake me for a grandmother with...
view all Catholic blogs
Copyright 2008-2021, Patheos. All rights reserved.